Good morning all , today it is release day for Pam Godwin's new book TAKE  ( book 5 in the deliver series) 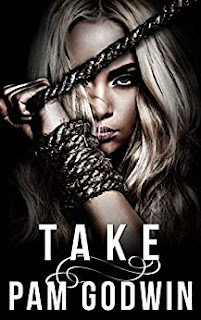 He’s a notorious crime lord, a kidnapper, and an artist.
Scarification is his outlet, and he just captured a new canvas.
Kate refuses to surrender beneath his blade or the cruelty in his beautiful eyes.
But she’s drawn to the man inside the monster. A man who makes her ache with his touch. Who owns her with his kiss.
A man who worships her as deeply as he hurts her.
She can run, but there’s no escape from a bond carved in scars.

MY REVIEW
Tiago Befell is evil and he is out for blood . Kate is the one thing that he can have and noone can take away . When he takes Kate he doesn't realize the power she will have over him . He may be evil but when she is with him there is more to life then the evil that he has lived in for so long . Is there a way he can have her and have a life away from the evil that has blackened his heart .
All i can say about these character . I thought that the characters in Devastate were well written . That is where we first meet Tiago . In take . the author builds on the the character and makes him very complex. He is not what he seems to be . He is evil but there is a reason behind his evilness . He is an alpha , dominate and oh so sexy, but there is another side to Tiago a side that he realy doesn't show that often . With Kate he starts to show that side just a little . The side where he worships her and maybe can actually love her in his own twisted way .  Kate well what can i say about her , she is a fighter and all she wants to do is get away . She sometimes comes off a little naive . She has been through so much first being taken and locked away by Van surviving that and then being taken by Tiago. Most woman would just give up but not Kate, like i said she is a fighter . Always thinking of a way to get away from Tiago . Then she doesn't want to she becomes more to him and she doesn't want to run away . She is a survivor and you will want to just wrap her up and tell her everything will be ok . Each character is great all by themselves but when they are put together the are explosive . You will love them trust me .
I was so excited to get this book I have been waiting to see if the author would write Tiago's story and boy she didn't disappoint . This book is so emotional I will admit there were parts of this book wher i had to set the book down and walk away for a few mins .  I seriously think this is the darkest book the author has written . She takes us to places that will have you seriously thinking what the heck did i just read . The characters are so well written and you will love them and hate them at the same time . I honestly didn't know if the author could redeem Tiago but i must admit she did . The twist towards the end of the book had me gasping with surprise .  I ugly cried a couple of times so be prepared . If you want a book that will have you on the edge of your seat all the way through . This is the book for you . You don't really need to read the book before but i would just to get the feeling for Tiago . There is no cliff hanger so there is a happily ever after . Check it out I promise you will love this book.
Posted by BOOKS TO CURL UP WITH at 7:57 AM