Good morning all woohooo it is Friday finally . This week just seemed to last forever or was it only me . Today I am going to review the fifth book in the Vampire Romance The Bryn and Sinjin series book 5 . THE SUITOR  by HP Mallory 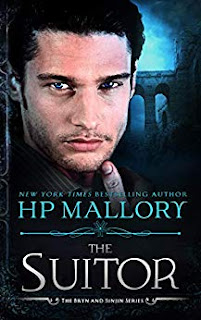 A war between the creatures of the Underworld and those who would see them extinct,
A woman desperately trying to understand and control her powers,
A seductive and charming vampire who serves as her protector, but hungers for much more,
And the man who steps out of her childhood dreams into her waking days with secrets of his own……

After a surprise attack on home soil leaves Queen Jolie and her court reeling, locating enemy forces becomes priority Number One. Desperate to prevent another attack, and with nothing to go on but a vision from a dream, Bryn leads a scouting party to find the enemy stronghold. The hunt takes Bryn, Sinjin, Dureau, and Damek to a land ruled by fae magic where the cost of admission might be more than they bargained for.

As I watched, the pointy end of the tree branch thrust itself directly into my palm. My vital essence was unceremoniously extracted. At first, I assumed the magical tree was merely stealing my blood. But after a few more seconds, I realized something much more elemental was being forcibly ripped from my being.
I clenched my teeth to keep my silence, although it took every bit of my considerable self-control to do so. Crying out my anguish was impossible with Chevalier watching me, eyes narrowed, as if he expected me to weep or scream as though I were a little girl.
My fangs descended from my efforts to muffle my torture, cutting into my lips in a manner that reminded me of the bark ripping into my hand. Gradually, my canines retracted little by little until I could no longer feel them at all. I was neither tensing my body nor grinding my jaw together any less or more than before, so that withdrawal made little sense to me.
The procedure ended as abruptly as it began. The branch extracted itself from my now profusely bleeding palm and resumed its original position, as though it had never moved at all.
“Why aren’t you healing?” Bryn asked as she reached out and gripped my hand.
“I know not,” I began.
“Sinjin,” she interrupted. “Your skin feels… warm.”

What happened to Sinjin? Does Bryn finally fall for him, or does her heart beat for Dureau, the man from her dreams? Read The Suitor to find out!

This is book five of the Bryn and Sinjin Series. Book one is Sinjin.

MY REVIEW
After a surprise attack on the castle Bryn and Sinjin are out for blood . The castle is reeling after the attack and Bryn and Sinjin are off to find the stronghold and bring them down . So off the to the land that is protected by Fae magic where Bryn, Damek, Sinjin and Dareau might not like the admission to the land . It could be more then they bargained for .
The gang is back  Bryn and Sinjin are back and honestly Sinjin is as sexy as ever and wh find out more about him . I have loved him since i first met him and was so excited to see him grow and become such a great leading man in his own series . You will love him and want to either climb him like a spider monkey or slap the smug smile off his face . Bryn well what can we say about Bryn she is strong and sassy and also kick butt.  I think she comes into her own in this book . She really takes control and really lays down some butt kicking . I truly liked these characters individually but when they are together they are a hot couple
I have liked all the books that this author has written but honestly I will say that i had trouble getting into this book . I felt like i just couldn't get into them at the beginning of the book . I kinda felt that there was something missing just couldn't put my finger on it . Once I got into the book I couldn't put it down . The author took us on a fun filled adventure with some smexy moments that will keep you reading .  You will laugh and cry and be on the edge of your seat . Over all I did enjoy the book and love the characters . If you want a fun read check it out .
Posted by BOOKS TO CURL UP WITH at 8:46 AM