Good Tuesday morning all I am so excited today because it is release day for one of my all time favourite dark romance authors Pam Godwin and book 6 in her Deliver series . MANIPULATE. 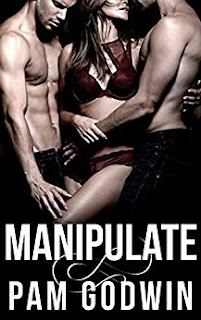 Tula Gomez is in the most ruthless prison in Latin America.

She only drove to Mexico to help her sister. She did nothing wrong.
But her quiet life changed in an instant.

To survive the violent, cartel-controlled prison where men blend with women, she pledges her loyalty to the notorious leader in exchange for the one thing she needs most.
Protection.

When she agrees to seduce the suspicious new inmates, Martin Lockwood and Ricky Saldivar, she doesn’t expect to enjoy it. Sure, they’re gorgeous, irresistibly alpha, and insanely talented with their hands and mouths. But they’re the enemy. She can’t fall for them.

Torn between her cartel loyalties and two men who want her as deeply as they want each other, she questions who is manipulating whom. Her search for answers leads to a passionate ménage, a soul-crushing secret, and an impossible choice.

MY REVIEW
Tula Gomez only went back to Mexico to help out her sister and ends up at the wrong place at the wrong time.  She is arrested and thrown into a mexican prison where men and women are mixed together .  After a night of what is considered hell on earth . She pledges loyalty to one of the most ruthless cartels, for the one thing she desperatly needed PROTECTION.  She becomes strong and hard until the day two mysterious  American men show up and she is asked to seduce them .  They are both hot , sexy and oh so alpha . Whats a girl going to do but maybe fall for them both . When she finds out the reason why they are really there she questions everything that the cartel stands for . Will she be able to survive with her heart intact and will she be able survive the cartel .

Ok what can i say about these characters . Well they are in my opinion are the best characters out of the series . Don't get me wrong I still love Van and Liv but Tula has come out as number one . She is naive at the beginning you really feel for her and the torture she endured . As you get into the book though she becomes such a strong force of nature . She does things you never thought she would do , but she doesn't really loose her humanity . I love her so much , there were moments where I just wanted to hug her and tell her everything will be alright .
Now lets talk men Martin and Ricky well lets say they are HOT , HOT oh did i say HOT.  They have been friends  and roommates for some time but they also have desires for each other but really haven't acted on them .  Ricky is kind of cocky and full of attitude which sometimes gets him into trouble . Martin is also so very hot but he has been through so much bad in his life . He is more reserved and quiet , he is a thinker . There are times where he goes into his head and that is where you just want to hug him and tell him everything will be ok . Each of them are hot and so alpha you want to climb them like spider monkey . Together with Tula they are on fire , you will be fanning yourself .

I sat down and started reading this book thinking that I would be able to put it down and head to bed . Boy I was wrong this book had be hooked by the end of chapter one . I had so many feels , I cried and I laughed and then there were the moments I was blushing and fanning myself . The author took us on such an emotional roller coaster ride . She put her characters through the wringer and you just wanted to hug them all . There are some really dark parts to this book like what happened to Tula at the beginning of the book and what happens through out the book .I must admit this is the darkest book of the series and I loved it . The author is taking more risks and making her characters darker and more dangerous . She takes on the world of cartels and sex trafficking and then adds the freedom fighters and love and mixes it all together . I will say that you need to add this whole series to your summer reading list . You will not be disappointed .