WELL MADE IT TO WEDNESDAY

Good day all , well it is Wednesday  and the week is almost over and the weekend is coming . Today we have the third book in the Witches of New Orleans series . THE FINAL DAYS OF MAGIC by J.D Horn 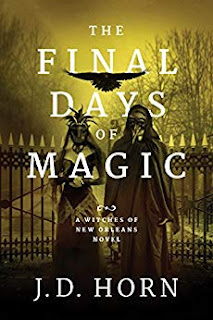 The war between witches reaches its terrifying climax in the final book in Wall Street Journal bestselling author J.D. Horn’s spellbinding trilogy.
Once caged in an illusory realm by blood relatives, Alice Marin has been freed into a world where the last remnants of magic are quickly passing away. Dissolving with them is the unity among witches…and their sanity. Grappling with the revelations of her true parentage—and her burgeoning relationship with Nathalie Boudreau, a psychic with her own demons—Alice and her allies, both living and dead, must draw on every skill they possess. It’s the only way to defeat the destructive forces borne of the horrifying history of Alice’s own family. That means unlocking the final secrets of The Book of Unwinding.
Now, on the longest night of the year, the streets of New Orleans will become a battleground as Alice and the few she can trust engage in a war amid the final days of magic. But the revelations that lie ahead may be too dark to escape.

MY REVIEW
Alice Marin has finally be freed from the illusory realm but the world she has been freed into is a world where the remnants of magic are passing away quickly . With that happening it is also taking with it the unity of the witches and along with the unity along with their sanity . She is fighting of finding out who her true parents are and a friend who is battling her own demons .  With the longest night of the year coming up fast Alice must figure out to defeat the destructive forces that haunt her family , Will she survive the night and will she survive the secrets that are too dark to be revealed .

The characters in this installment were written well but I felt that they just weren't as complex as the characters in the first two books . Alice seems to be just hanging on sometimes by a thread . She does come off just a little be naïve at the beginning but she does grow into the witch that she is suppose to be . She does get stronger as the book goes on . Natalie is kind a crazy her demons really drive her around the bend .  They are good characters I just think they need a little more depth to them .

I was so excited to see the third book in the series . I truly loved the first two books and was just excited to get it . I sat down and started reading, I will say I couldn't really connect with the main characters in this installment . I felt that they were just there going through the movements . You sometimes feel lost while you were reading . There were also times where I kind of skipped over the inner monologues . I just felt that they didn't really need to be there . I will say the second part of the book was better then the first part . When they started battling and fighting to keep the magic . It was going great and then it just stopped . There were parts I truly loved in this book I mean there are parts that are slow but it really doesn't over shadow the rest of the story at all . I strongly suggest that you read the first two book so you know that is going on and who all the characters are . If you want a good witch series for your summer check them out .
Posted by BOOKS TO CURL UP WITH at 1:40 PM