Good morning all today I have a really great new release for you if you like mafia romance this is the book for you CIARAN  by Theresa Sederholt. 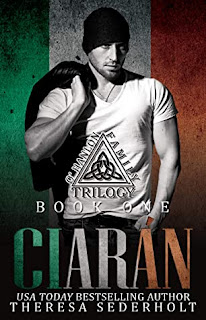 Everything else is a waste of Ciarán’s time.

As the eldest son of the O’Hanlon Family, Ciarán knows it’s his responsibility to carry the weight of their sins on his shoulders. He will do anything to protect them at any cost.

When his sister, Eevee, finds more trouble than she bargained for, Ciarán’s world turns upside down by the secrets she holds.

Will tragedy bring them together or divide them forever?
MY REVIEW
When Evee takes a job that takes her back home to Ireland , she finds herself back in the house with her three brothers . Ciaran is the head of the O'Hanlon family and is one powerful man. When he finds out what his sister is doing he will do anything to keep his family safe and the secrets they hold even safer .  He finds out his sister is holding even more secrets and with those secrets bring them down or bring them together .
Omg this is a book full of secrets and lies that people tell themselves . Ciaran well he is the head of the family and with that he has a lot on his shoulders and really he is strung really tight. He can be lethal when he wants to be and then he can also be kind of a fun loving guy if he can let his hair down . He is sexy and deadly at the same time . His brother Patrick is just as sexy and deadly . Ronan well he went to the church and became a priest but alas he is still sexy and could be as deadly . They are deadly as individuals but together they are lethal . Evee is just as deadly she maybe the baby of the family but she can be just as lethal. She was the princess of the family and felt like she wasn't even in charge of her own life . Until she is in Vegas where things are more then they seem . These characters are so well written and complex you will love them and hate them at the same time . Trust me .
This is the first book in the series for the social rejects syndicate . This author did a good job with the Irish mob aspect . Her style of writing is straight forward and honest . The characters are well written and you will hate them and love them at the same time . This book I couldn't put down , i was sucked in by the time I was done the first chapter . The characters sucked me in and the location, Ireland had me dreaming of going for a visit . There is a twist at the end that will have you crying trust me I cursed out the author for what she did . As she quoted it had to be done to bring the brothers together . Still I was shocked when I read the ending . i so can't wait to see where she takes the brothers in book two . So if you want a great read for and evening check it out you will not be disappointed . You could have a new Irish heart throb .
Posted by BOOKS TO CURL UP WITH at 6:51 AM