Good morning all , today I have another new release . The eighth book in the Deliver series by Pam Godwin , DOMINATE . 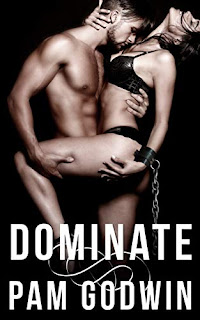 There are many reasons to jump off a bridge, but Rylee Sutton only needs one.

Her husband’s betrayal.
Just before she leaps, she receives an email from a stranger.
The boy’s message is meant for his dead girlfriend, but his anguish speaks to Rylee.
It saves her life.
Over the next decade, Tomas Dine continues to email his dead girl. As he evolves from a teenager into a hardened, vicious criminal, Rylee is there, reading every intimate word.
He doesn’t know she exists.
When she comes forward, he despises her, his cruelty unforgivable. But she doesn’t back down. In a carnal battle of punishment and passion, hatred dominates.
Until he loses her.
Amid looming danger and unsolved murders rises a devotion forged in strife.
Love is lethal in his ruthless world. To survive it, they must fight for answers—and each other.
MY REVIEW
It all starts that day on the bridge where a young woman was going to take her own life .When she gets an email from a unknown young man talking to his dead girl friend . His emails brought her back from the brink , unknowing to both of them those emails will bring them together a decade later. One a brutal criminal and one just trying to meet the man that held a place in her heart for all those years . From the beginning Tomas needed to know what she knew but when punishment ignites into passion . He looses her but will fight the world to get her back . Will he and the gang be able to figure out who wants to kill her and will he bring bak the only woman who flames his fire like she does .
Omg what can I say about Tomas and Rylee. Tomas well he is lethal and oh so sexy he just makes such a big statement when he walks into a room. Deep down inside he is just a man who has been hurt and just needs to be wanted by someone.  He has lived in the past for too long and now it is time to let it go . Rylee well she is broken and doesn't want attachments , after what her husband did . She is stronger then she realizes and when push comes to shove she will kick your butt just as easily as wink at you . Then enter the rest of the freedom fighters . It was great to see them back and deadlier then ever. All my favourites were back from Liv to Van oh yeah and Cole yes swoon worthy Cole .
I read this book and was lets say emotionally wrecked by the time I was done . The author took us to the edge but brought us back yet again . Even after 8 books the author knows how to rip at our heart strings and then bring us back . Her characters are so well written and complex . You don't know if you should love them or hate them through out the book .  I am kind of sad that this is the second last book in the series . I have one more book to have all the feels of this series .  This book should be read in order so you can know all the characters and what they actually do . This is book you can read in an evening so check out the DELIVER series I promise you will not be disappointed in the least .
Posted by BOOKS TO CURL UP WITH at 6:36 AM