Good morning all welcome to hump day and one of the hottest days here on the ranch. Today I have book 6 in the Happily Never after series by Plum Pascal / |Hp Mallory . Let me introduce you to TINKER 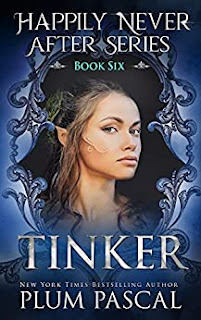 Tinkerbell has been left isolated on ‘Death Isle’ with only a crocodile shifter named Zegar for company. The only thing Tink enjoys are the many tales Zegar tells her about Peter Pan and his misfit crew of Lost Boys.

Imagine Tink’s surprise when none other than Pan, himself, arrives on Death Isle, telling Tink he’s come to return her to Fantasia, where she, as one of the Chosen Ten, is meant to help defeat her evil Uncle Septimus and the witch, Agatha.

Immediately, Tink is enraptured by Peter’s handsome face, his charisma, and his confidence. But, there’s also something about Quinn, Peter’s right-hand-man. As the brother of legendary Captain Hook, Quinn is quiet and brooding and Tink can’t help but want to unravel the mystery that surrounds him.

Accompanied by Peter, Quinn and Zegar, Tink will find herself in the fight for her life against Septimus and Agatha’s legion of monsters.

MY REVIEW
Tink has been on Death Isle for such a long time, the only companion the crocodile shifter that bit of Hook's hand , Zegar. He tells her tales of Pan and the Lost Boys . She thought of them as stories until the day that Pan shows up on the isle and says he is here to rescue her and take her Fantasia to be part of the 10 that are chosen to save their world and defeat Septimus and Agatha. When she is around Pan and Quinn she has feeling that they are destined to be more . So off they go to help save their world. Will they all come out with their hearts intact.
In the sixth book of the series we meet Tinker and the men in her life . Tinker is a little naive at the start of the book , she is trying to get off the isle but she knows she can't right yet .  At the beginning she is full of self doubt and scared of what could happen to her . As you watch her in the story she really starts to come into herself and really blossom .  Zegar is the legendary crocodile that ate Hook's hand and he reminds me of the grumpy best friend that has feelings for his best friend and doesn't know how to act on them. Pan is fun loving and sweet when you get right down to it but he does have his man moments that will make you laugh . Then there is Quinn who I think is my favourite . He is sweet and caring and kind of shy . He only wants to keep everyone safe and he wants to love Tinker with all his heart . They are such fun characters and very well written.
This was the book in the series I have been waiting for , I love Tinkerbelle and I really wanted to see where the author would take her . I must say she didn 't hold back , the characters were well written and complex. You really got involved with them and you will cheer for them and cry with them .  This is a fun fast read that you can read in an evening . I was kind of sad that we only got to meet two of the three men that are her mates but I am thinking that the third one was shown to us and has been in the entire book and just doesn't know it yet . I can't wait for book seven in the series . So if you want a fun summer read check out the HAPPILY NEVER AFTER SERIES  you will not be disappointed .
Posted by BOOKS TO CURL UP WITH at 6:42 AM