Welcome to Monday everyone, today I have a new author to me .I am loving her writing so far . So lets go into the WILDERNESS by Lynn Burke 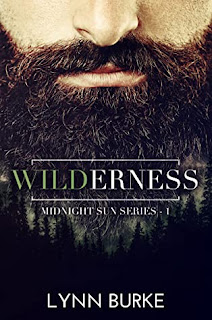 I get off on tempting fate—until the day I make a reckless misstep that claims three lives.

The Alaskan bush offers the perfect opportunity to overcome survivor’s guilt and find peace: Live off grid in seclusion where a mistake only threatens one life—my own.

My only tie to humanity is a feisty bush pilot who hates everything I am. Even though the connection between us blazes like a forest fire, she’s determined to keep her distance.

The backcountry has other plans, however, and I end up with her life in my hands.

Unknown to me, there’s a tenacious huntsman on her tracks, shadowing her every move, and one wrong choice leaves her vulnerable.

He takes what's mine.

A wild beast rises inside me, and the hunter becomes the prey. I will level mountains, fight the untamed wilderness, to save her—even if I leave a path of carnage behind me.
MY REVIEW
Two lost souls that are destined to be together . Brock is trying to run from his past as he tries to amend for the accident that happened to him as he was the pilot in the plane that crashed and killed its passengers. Jessie is the pilot that is flying him out to his cabin in the middle of nowhere. She is having her own problems with a stalker , the man who wants more then she is willing to offer him.  Brock and Jessie have one night of mind blowing sex and they were suppose to walk away but circumstance keeps bringing them back together and falling for each other . When she is taken it take all of Brock's wildness to bring her back safe and sound.
This is an intense book and the characters are so well written and complex from the very start.  Brock is an intense alpha male that is at a cross roads in his life . He is cocky but also has a sweet side . But he is also running from a past that is haunting his every waking moment. He has a dark side that is scary and well really kind of a turn on . Jessie is a woman who is fighting her own demons and the dark memories of her past when her parents died. She trying to stand on her own two feet and doesn't trust anyone . All she wants is to get her dad's business back and get her stalker off her back . Both these characters are broken and want nothing to do with anyone. They need each other but won't let each other in until something bad happens . They find their way to each other and they are explosive together.
I was in a reading slump and a friend suggested this book to me . So I started reading it and boy I was invested in this book by the end of chapter one. The characters had me sucked in and caring for them cause they are so well written and complex . The author takes us on an emotional roller coaster with so many twists and turns . This is an intense book that could have you reading all night long . I just couldn't put it down . There is a twist at the end of the book that had me going OMG didn't see that one coming . So if you want a great angsty book that will have you reading well into the night check it out . I promise you will not be disappointed