Good Tuesday morning all . today we have a book that is one fun filled ride that will also make you think.  This is the first book I have read by this author let me introduce to you GIDEON'S PASSAGE by Ben Laffra. 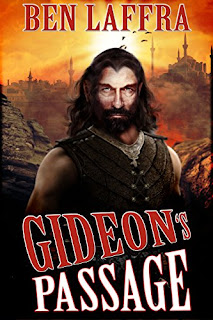 Gideon the Warrior, the Lover, the Statesman.

Killing is the sole province of the religious fanatics, an axiom as true today as it was some five hundred years ago; and no nation, region or person is immune. Europe had clawed its way out of the Middle Ages with the dawning of the renaissance, only to be plunged once more into darkness, as the dogs of war circled to destroy its resurgence during the 16th century. The Islamic successor to the Roman Byzantines, the Ottoman Caliphate, flexed its muscles to conquer much of Western Asia, North Africa and South-Eastern Europe. Christian Europe shuddered when the once invincible bastion of the Knight’s at Rhodes were defeated; and now trembled as the Ottoman army rattled the very gates of Vienna. No Christian army, it seemed, could withstand the ferocity of the Azabs, the Akıncı, the Sipahis, the Janissaries, and animal like Iayalar’s of the all-conquering Islamic hordes. This then is the cauldron into which Gideon de Boyne is unwittingly thrust with his small army of dedicated Christian warriors. On the hostile island of Crete, at the doorstep of the Ottoman Empire, Gideon must face not only the overwhelming force of fanatical Islamises but his own inner conflicts of the futility of war and his very Christian beliefs. Will he succeed and come out of it unscathed?

MY REVIEW
Let me tell you this when I first started this book I was daunted by the fact that it had 74 chapters in it, I thought that it was going to take me a month of Sundays to read . Well it didn't, once I started I couldn't put the book down, the pages turned themselves , I got lost in the pages and transported back to a time where there were strong women and men could get along with each other and treated each other as equals . The book takes place in the 16th century , Europe is just coming out of the middle ages and plunged into war against the Ottoman empire which is knocking on the doors . This is the story of one man's inner conflicts about war and his own belief system . There is more to this story then meets the eye . There is more to the book then just war and one man's belief . We have romance and some intrigue and lots of fun .
This book has so many strong characters . Gideon is so complex and you will kind of fall in love with him as you read . He is young and kind of cocky but also is a statesman and a great leader to his army . You watch him grow from a young cocky man into a man that you can trust and rely on when push comes to shove. He values people more then the colour of their skin or their religious beliefs . He is a true hero in my eyes and made me think.
There are also a few very strong female characters in this story . They show us that woman can be strong and love with all their hearts. Gonul is such a character she is strong and is taking after her grandfather in the ways of healing . She help to heal Gideon in more ways then one . You have to read the book to find out.  Catherine is another very strong character we meet her at the beginning of the book in a very intriguing way . She is young half French half Ottoman woman born of noble heritage. She is sent to France to continue her education where she is mysterious and beautiful beyond means . She captures young Gideon's heart as she uses her feminine wiles on him . She knows how to use her femininity to get what she wants . There are so many great characters I can't go through them all but we do have our bad guys and our good guys. They all add to the story and keep you reading
This book to me started of oh so steamy and just keeps getting better with each turn of the page .  You will blush and giggle and be in awe of this gentleman's writing . His writing style is unique as he doesn't dumb things down for the reader . Trust me when I say this . You will fall in love with the characters and love the meaning behind the story.  A woman can bring a man to his knees with the power she wields and men can live as equals despite the colour of their skin or their religion . The biggest part of the book is that LOVE conquers all . So if you want a smartly written book full of intrigue and romance . Hot men wielding swords and strong woman who know what they want . Check our Gideon's Passage by Ben Laffra . I promise you will not be disappointed .