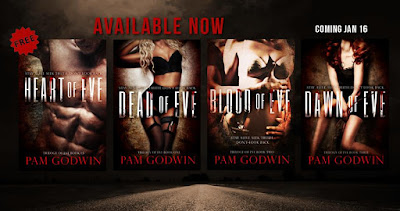 HEART OF EVE (new novelette, an introduction to the series) 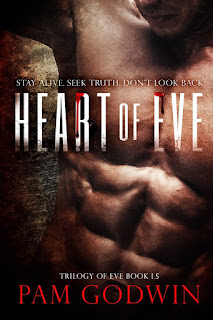 Goodreads → https://www.goodreads.com/book/show/32621424-heart-of-eve
https://www.amazon.com/Heart-Eve-Trilogy-Pam-Godwin-ebook/dp/B01M4M8XIE/ref=sr_1_10?s=digital-text&ie=UTF8&qid=1477319949&sr=1-10&keywords=pam+godwin
BOOK BLURB
My vow of celibacy has never been broken nor tempted, not even when the plague thrust me into a lawless, brutal world.
So why did God send the only surviving woman to a priest? To test me? Or to save me?
DEAD OF EVE (Bk 1) 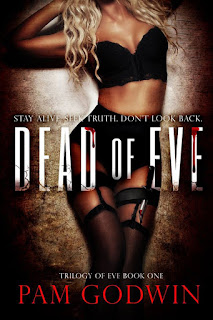 Through a quirk in her genetics, she survives. When her physiology begins to evolve, she must come to terms with what she is and accept her role in finding a cure.

The mutated hunt her. The men brutalize her…except three. Cryptic warrior, contrite lover, caring enemy; they are fiercely protective of the last living woman, but divided in their own agendas. Can they come together to protect the only hope for humanity? 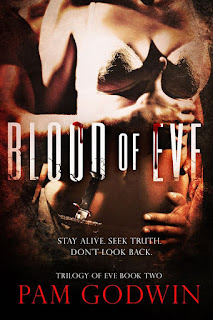 BOOK BLURB
Two years into the aphid plague, there’s little hope left. Food and ammo are scarce. The mutated monsters are growing faster, smarter. And the ratio of men to women is millions to one. Mankind faces imminent extinction. 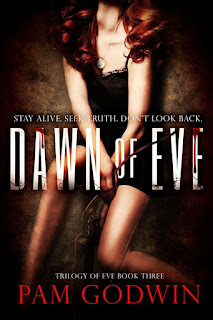 Goodreads → https://www.goodreads.com/book/show/17287865-dawn-of-eve
AMAZON https://www.amazon.com/Dawn-Eve-Trilogy-Book-ebook/dp/B01M4K631Y/ref=la_B00A3AF2LY_1_7?s=books&ie=UTF8&qid=1477321947&sr=1-7
PRE ORDER NOW
BOOK BLURB
Daughter of Eve. Leader of the Resistance. Mankind’s savior. Dawn is supposed to be the ultimate weapon against the bloodthirsty hybrids that control the desolate planet.
But she didn’t inherit superhuman speed or virus-curing blood.
She’s just a human.
The pursuit to unlock her power lures her into a venomous trap, where silver eyes seduce, fangs incite pleasure, and love and devastation wear the same handsome face. He’s her deepest desire, greatest enemy, and the key she’s been searching for.
With humanity balancing on an arrow’s edge, she must win his heart or destroy it.

New York Times and USA Today Bestselling author, Pam Godwin, lives in the Midwest with her husband, their two children, and a foulmouthed parrot. When she ran away, she traveled fourteen countries across five continents, attended three universities, and married the vocalist of her favorite rock band.

Java, tobacco, and dark romance novels are her favorite indulgences, and might be considered more unhealthy than her aversion to sleeping, eating meat, and dolls with blinking eyes.

OTHER BOOKS BY PAM GODWIN