Good Thursday all . Hope your week is going well mine has been busy . Today we are going to review HISSES AND HONEY by Shannon Mayer. 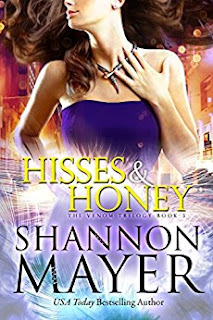 The climactic final volume of The Venom Trilogy by USA Today bestselling author Shannon Mayer.
Humble baker turned supernatural Alena Budrene is lovely and lethal, and for the first time, she’s owning it. Finally rid of her low-life ex-husband, she’s free to date sexy vampire mob boss Remo, who respects her as both a Supe and a woman. She’s on good terms with her difficult mother, and she’s growing comfortable with her powers.
But just when it seems things are falling into place for Alena, Hera strikes again: the Aegrus virus rages across Seattle, threatening the life of everyone in its path—including Remo, infected by Hades. The only way to stop the carnage is to face Hera and her army in a no-prisoners battle to determine the fate of the human race—and Alena’s future.
In a sweeping voyage from the Seattle bar scene to a netherworld populated by murderous gods and monsters, Alena confronts one adversary after another on a quest to set the world right for both humans and Supes and demonstrate her power—to the gods and to herself—once and for all.
MY REVIEW
This is the final book in the series and the author doesn't let us down . Things are looking up for Alena . She is on her way to proving that she is alive and get a divorice from her slimy ex husband .  She i falling in love with the oh so sexy Remo . vampire mob boss . Family is getting along . Her mother and her are mending fences so to speak .  Until Hera wants to play with her again . Will Hades and Hera destroy everyone or will Alena stop the war before they take everything away from her.
I love this series and fell in love with Alena and Remo. When we started the series we find Alena a naive young woman who can't believe what has happened to her . When she was turned into a monster from Greek mythology . We see her grow up and into her new role in this book . She isn't backing down from anyone . She is up for the battle of her life . Even when tragedy hits . She takes on the Gods to stop what is about to happen . She is kick ass and taking no prisoners .  Remo kind of takes a back seat in this book . He is attacked and Alena has to fight to get him back to normal . He is stricken down by Hades .  I will say that these characters are well written and developed . You can't help but cheer for Alena and swoon at Remo's feet .
This author takes Greeks Gods and monsters and twists them around . Where the monsters are the good guys and the Gods are waring with each other over the world . Zeaus is running rampant all over town, not caring what is going on.  There are some things that if the author wanted to continue the books she could expand on. LIke Tad and Dahlia, Zeus and Alena's grandmother and Sandy she needs a love .
There are twists and turns a plenty in this book . I love Ms Mayer's writing style and loved this series . She takes us on a fun filled joy ride that will make you giggle through out the whole book .  The series is light hearted and fun . I do really hope that she continues the story in the other characters . They would be awesome spin offs . I would love to know about Zeus and grandma. You have to read the first two books for book three to make sense . I strongly reccomend  them to you if you want a fun read full of angst . laughter and romance amongst the war of the gods . Check out the Venom trilogy . You will not be disappointed .
I was given this book for my honest opinion .