WELCOME TO WEDNESDAY ITS SUPERNATURAL BOYFRIEND DAY WITH ENTANGLED

This week I’m helping Entangled Publishing celebrate new adult heroes! Today is focused on the out-of-this-world hotness of otherworldly heroes! Entangled has all of the Embrace books that feature paranormal heroes on sale for just 99¢ today!


Who or what inspired your otherworldly heroes?
Reese Monroe (author of the Bound by Hades series): I've always been inspired by The Rock and Vin Diesel. Yeah, I know I kind of dated myself a little there, but in some of their movies...**whew**...the lengths to which they'll go to protect what's theirs--amazing to watch.

Off the screen, if you watch their social media feeds, it's all about family, inspiration and working hard for your goals. I'm all about that.

Oh, and they're nice to look at, too.

As far as what inspired me while creating my heroes...Love. In all honesty, faith, hope and love are the key elements to all my stories. Love being the greatest of these. It makes my heroes stronger than they already are and that kind of strength, no matter what kind of evil they face off with, gives them an edge.
Jocelyn Adams (author of the Mortal Machine series): Years ago, a friend of mine suggested I read the Anita Blake series of books by Laurel K. Hamilton, and I absolutely fell for Jean-Claude. Tall, unusual, with a colorful past, and that French accent was the cherry on top. He was the first hero I'd ever read that stepped outside the boundaries of typical romantic relationships. The moment I finished the first book in the series, I knew what genre I wanted to write.
Besides otherworldly heroes, about what kind of heroes do you like to read?
Marnee Blake (author of the Altered series): I love reading about heroes who do real-life heroic things as well. FBI agents, cops, detectives, military men, firefighters... People who help others are sexy.
Reese: Those who cherish their mates above all else and would do anything for them. Also, I love a good hero that is strong and honorable.
Jocelyn: Dark anti-heroes are my absolute favorite, or even better, villain-turned-heroes. There's nothing I love more than a good redemption story. 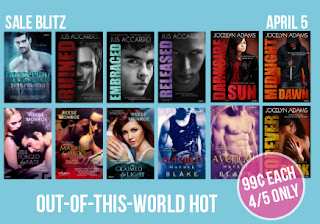 Rafflecopter Giveaway: A grand prize pack of signed print books, ebooks, swag, & specially selected gifts from your favorite Embrace authors!
Link: http://www.rafflecopter.com/rafl/display/1cb554951071/?
Posted by BOOKS TO CURL UP WITH at 7:30 AM