Good Tuesday morning all . Today we are going to review SCABS III ,Humans, Gods and monsters by Eric A Shelman. 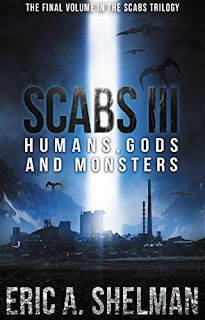 THE FINAL TALE IN THE INTENSE SCABS TRILOGY

I was created by human emotion; love, elation, hate, fear, desperation. On occasion, I awaken and become aware. It is always triggered by humanity's cry for help. ~ Kokumthena

Scott, Warren and Missy Walsh did not understand what their roles were to be when the omnipresent light first blinked on. They believed their only obligation was to find a safe place for their small family to escape what was happening all around them. But fate would not allow them to hide away in the North Carolina cabin for long.

Now, with their number hovering near a dozen survivors, they must work together – along with Koku, the flawed, self-aware Goddess with a long-term memory problem – to preserve Earth for humanity’s occupation.

Earth Canyon Retreat is their sanctuary for the moment, but as the invaders make adjustments, so must the survivors. As the winged, clawed and fanged monsters ravage all life forms on Earth, working toward their goal of total annihilation, these ragtag remnants of humanity must find some way to drive the interlopers from the planet.

For when humanity dies, so do its Gods ... once and for all.

MY REVIEW
This is the last book in the series and what an ending it is . This is an action packed book . The story picks up where book two left off . The gang is still at Earth Canyon retreat . They are healing and trying to figure out their next step. They are battered , bruised but have some new found powers that may help annihilate the gross invaders. Will they survive and will they be able to take back the world .
I have read all three books in this series and I must say the author has wrapped it up pretty good . The characters are so well developed and as you read the series you see them grow . They become more of the hunter then the hunted . You see them loose people close to them and you will cry when they say good bye . You see them live their lives and actually fall in love . Yes I said love, you can't go through the end of the world with out falling in love a time or two , while fighting those creepy invaders .  I must say I really got invested in these characters , I was cheering when they succeeded and cried when they lost . Laughed so hard in some spots especially when Koku was involved the goddess had such a bad long term memory . You could see the guys getting frustrated
I am kind of sad the series has ended , this was a great series that kept you on the edge of your seat . Wondering what was going to happen and it they were going to survive . Yes there is gore but the author doesn't over do it, its done right . I read this book in a day , I just couldn't put it down . The author had me sucked in and I couldn't wait to see how it was going to end. The twists and turns had me wondering and trying to figure out what was going on. The twist was a jaw dropper to me and made me go WTH. The series is such a great story . So if you want a series that will keep you reading well into the night . This is the series for you . SCABS III  rocked check it out and check out the series .