ITS FUN AND FRIDAY

Good morning all its Friday and I have a fun read for you today . Its the second book in the Lucy Westenra series . Here is  GALLANT GHOST AND GHASTLY GENTLEMEN  by Hp Mallory and J.R Rain . 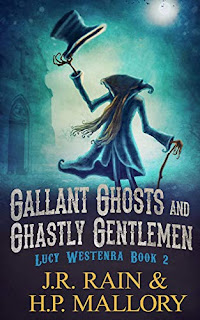 So, that saying that goes: ‘when it rains, it pours’… yeah, it’s pretty much spot on. Not that I ever really had good luck, but I’m not sure how much worse my luck could get…

For the first time in a really looooong time, I’ve got a boyfriend—Dr. Henry Jekyll. And he’s everything you’d want a boyfriend to be—charming, sweet, loyal. Only problem is, I can’t be left alone with him.
Yeah, you heard that right. Ever since I agreed to becoming a full-time employee of the Holmwood Association (that apprehends monsters), I’m being kept under lock and key. If I’m allowed outside the compound, it has to be with a chaperone—all owing to the fact that I’m half-vampire.
But here’s the part where my luck takes a serious plunge… while on a date with Henry (and Simone—our chaperone), I notice a shadow lurking just outside the opera house. Thinking it’s none other than the bane of my existence—Dracula, himself—I follow it. And I nearly get killed by a collapsing parapet of bricks.
That’s when I realize this isn’t the work of Dracula, because Vlad would never kill me—not when he wants me to return to him forever (ahem, over my undead body).
Meanwhile, numerous people around Sacramento are spontaneously combusting and the finger seems to be pointing at Morfran—a demon who grants favors. Yet, when I start to investigate, I realize Morfran is involved, yes, but only in so much as he’s being targeted. Also targeted are all his clients who bear his mark… and guess who’s included in that esteemed crowd?
Yep, you guessed it.
Now, I’ve got to hurry up and figure out whodunit before I become another spontaneously combusting victim.
MY REVIEW
Lucy well she is having a time she is basically under lockdown and she finally has a boyfriend .    Dr. Henry Jekyll and she can't even see him . While she is trying to see her man there are people spontaneously combusting all over town. People are pointing at Morfran  a demon who grants favors .  Will Lucy find out who is responsible for all this or will she be the next one to self combust .
Well what has Lucy gotten herself into this book . She is trying her damnest to have normal life. She is fighting to have a normal life . I love her she is such a strong woman and is trying to live a normal life . Her vampire side is fighting to come out and is playing havoc especially when Vlad Dracula is around . She is strong willed and determined to figure everything out .  I love this character and her counter parts.
This writing duo is amazing as a writing team each author brings a great addition to the story .They have such great ideas on how to bring the characters alive . This book is a fun read that will keep you entertained . The story moves fast and you will get caught up in the characters . This is the second book in the series and the characters are getting more and more complex  Check out the series and be prepared for a fast paced fun filled read .  So if you want a fun filled read check them out .
Posted by BOOKS TO CURL UP WITH at 8:06 AM