Good morning all , its two days and counting until Christmas where did the year go . Today I have the seventh book in the Mists of Mayhem and Magic series . ONE WITH SHADOWS  by Hp Mallory. 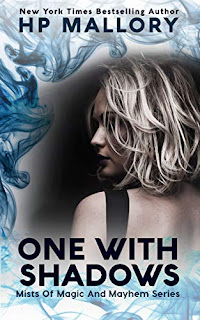 Episode 7: One With Shadows

After finding out all her schoolmates are possessed with the ghosts of long dead Druids, and narrowly escaping a close call with the Vryloka, Emma is on the run with the only man she trusts—her professor, Stone Draper. What will happen once they find themselves ensconced in a small cabin, out in the middle of nowhere?
Pagan isn’t sure it’s such a great idea to break into the Masked Magistrates with Nyx, in order to steal something—something unknown to him. But, when they get caught, and Pagan narrowly escapes, what will he do when he finds out Nyx never escaped?
Jolie is still haunted by her feelings for Rand, meanwhile her feelings for Morse are becoming more and more difficult to ignore and fight. She can’t help but wonder, though, what Morse is hiding? The more she thinks about him, the more she realizes she really doesn’t know who he is.
And Laucian finds himself more and more taken with the vampire hunter sent to murder him. When he appeals to her to help him defend Rowan, will she take the job?
MY REVIEW
Wow there is so much going on in this installment of the series .  Jolie is still being haunted by her feeling for Rand as her feeling for Morse are becoming harder to fight.  Poor Emma is running from possessed classmates and the only person she can trust is Stone .  Pagan is having second thoughts about Nyx and helping her out . And we have Laucain who well is trying hard not to fall for the vampire hunter that is after him and will she help him to protect Rowan .
Ok with this being the seventh book in the series we are finally getting to see more action . Each character is having so much going on . Emma is being chased and Stone is protecting her and boy do the sparks finally fly in the tiny cabin in the middle of nowhere.  Jolie finally gets to the spot where she finds out why she is being kept in the Abyss and why . I really love all of these characters and who with each episode of the series you see how much they have grown and become so much more complex . Even the new characters we see them growing and becoming more and more complex . They are holding their own with the characters we love .
This series is really becoming one of my favourite series . The author takes us on an emotional roller coaster ride in each book . She packs a lot into a short book. Each and every book in the series is just a fun read . I strongly suggest you read in order so you can get to really know these guys .  So if you want a good series to take you into the new year check them out, I promise you will fall in love with each and every character.
Posted by BOOKS TO CURL UP WITH at 7:06 AM