Today we are featuring the second book in the LOVE HAIGHT series by Jean Rabe and Donald Bingle. 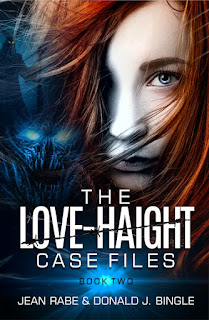 Supernatural beings are willing to fight for their legal rights!

Since the Summer of Love, the Haight-Ashbury district of San Francisco has been known for attracting weird and unconventional souls, but things got even stranger when the monsters moved in.
Magic has returned to the world and with it a host of supernatural creatures—not just vampires and ghosts, but sentient gargoyles, ghouls, sprites, faeries, and more. The frightened citizenry, holier-than-thou bigots, headline-seeking reporters, and harried police refer to them as OTs (Other-Than-Humans), but Thomas Brock and Evelyn Love believe even supernatural creatures have legal rights.
Delve into their case files for a genre-bending mix of mystery, horror, suspense, thrills, courtroom drama, and romance. The city’s OT element is sometimes malevolent, sometimes misunderstood, and often discriminated against. Brock and Love represent them all, dead, undead, or alive—whatever the case, whatever the species. 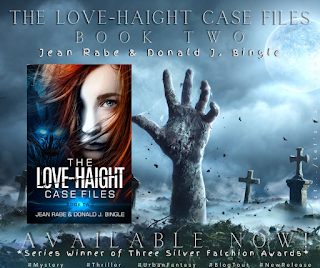 “I didn’t do it. I didn’t kill him. I couldn’t possibly have killed him.” Murphy paused and sucked in a big breath that swelled her ample chest. “Well, of course I could have killed him. I could have easily killed him. Everyone is capable of doing something awful and heinous and soul-numbingly disgusting like that. But I didn’t do it.” She paused again. “I loved him. I really, truly, deeply, and with all my heart loved Nathaniel Terrence Jackson the Third.”

Evelyn Love sat across from the nixie in an uncomfortable straight-backed chair; it was pitted metal gray, the table gray, the floor concrete and a slightly lighter shade of gray, the block walls painted gray, the only interruption being a mirror framed with a stripe of black, which was a two-way glass window—and there damn well better not be someone on the other side of it watching. This was an attorney-client meeting and therefore privileged.

“Nat-Jack and me … I called him Nat-Jack. I was swimming out by Alcatraz Island, and I saw him on a boat, some sightseeing and fishing combo thing, he said. He was handsome. I surfaced and said ‘hi,’ invited myself onboard, and rode back to Fisherman’s Wharf with them. After that, we’d meet a couple of times a week down at the beach. That’s where I fell in love with him, by the sea. He always looked sophisticated, nice clothes, kept his hair styled. I adored twisting my fingers in his hair. It was as black as a freshly-painted freighter bottom. Oh, and his blue eyes. Gorgeous blue eyes. And you could tell he worked out because—”

Thomas Brock floated through the door and hovered half-in and half-out of the chair next to Evelyn and whispered to her that the observation room beyond the mirror was indeed empty. The ghost attorney leaned forward as the nixie continued to expound upon her love of the man she’d been accused of murdering.

“—I’m attracted to men with muscles, and Nat-Jack had these arms … guns, he called them. They weren’t guns, of course, not the kind that you could fill with bullets, aim, and pull the trigger. They were well-muscled arms, tanned and pretty. One arm had a tattoo of a cross with John fourteen-six printed under it, a religious reference, I think. But he called them guns, his arms. Maybe that’s a football-thing, you know, a football term. Guns. Nat-Jack was with the Forty-Niners team and—”

Evelyn thought the nixie lovely. No, that was an insufficient word. The lithe woman in the green prison jumpsuit—green being the color given to those accused of murder or on suicide watch—had a heart-shaped face, glittering emerald eyes, slightly pointed ears, and long silver hair that undulated slowly like sea fronds stirred by the tide. Her skin was flawless and the shade of polished pewter.

“I’ve never been to a football game, but Nat-Jack promised I’d have a seat at the fifty-yard line when the season started. He said I could eat popcorn. I like popcorn, don’t you? They sell popcorn at Fisherman’s Wharf. The kind with caramel or butter—”

Murphy’s childlike voice was musical, sounding like she sang rather than talked. Evelyn thought she also sounded vacuous and her chatter inane.

Exotic and vacuous and musical.

And the nixie had admitted right here—and earlier to police—that she was fully capable of murder. Murphy prattled on for several more minutes before Thomas interrupted her.

“According to police,” he began “you were—”

“That detective, the one who arrested me … well, there were two detectives. I guess they both arrested me. But the tall one, the older one, he wrote on the arrest form that I’m a Rusalka. I’m not a Rusalka. There are a few Rusalka out in the bay sometimes, but I’m a—”

Evelyn didn’t know the difference between a nixie and a Rusalka, but figured she could look it up later. What was crucial now was finishing this interview and preparing a defense, as they’d agreed to take her on as a client.

“The guard with the crooked nose said you are one of the best attorneys in the city, Mr. Brock, even though you’re dead.” She took another deep breath. “I’m sure you’re a good attorney, too, Miss Love. Evelyn, right? Love is a last name, right?”

“Nice name, Love. I loved Nat-Jack with all my heart. I think I mentioned that. Love. I don’t have a last name. I don’t need one.”

From there she went on to become the director of RPGA, a co-editor with Martin H. Greenberg for DAW books, and, most notably, Rabe is an award-winning author of more than forty science fiction/fantasy and murder mystery thrillers.

Find out more about her at www.jeanrabe.com, on social media, or sign-up for her newsletter here: https://jeanrabe.com/sign-up-for-my-newsletter/ 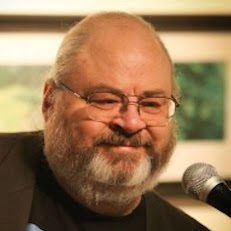 Donald J. Bingle is the author of eight books and more than sixty shorter works in the horror, thriller, science fiction, mystery, fantasy, steampunk, romance, comedy, and memoir genres, including the Dick Thornby Thriller series (Net Impact; Wet Work; Flash Drive), Frame Shop, a murder mystery set in a suburban writers’ group, Forced Conversion, a near future scifi thriller, GREENSWORD, a darkly comedic eco-thriller and (with Jean Rabe) The Love-Haight Case Files, Books 1 & 2, a paranormal urban fantasy series about two lawyers who represent the legal rights of supernatural creatures in a magic-filled San Francisco. He also edited Familiar Spirits, an anthology of ghost stories. More on Don and his writing can be found at www.donaldjbingle.com and on social media. Sign-up for his newsletter here: https://www.donaldjbingle.com/newsletter-sign-up
Posted by BOOKS TO CURL UP WITH at 7:02 AM