Good day all , its Friday eve and I have a hot mafia book for you today . Its a dark romantic tale so let me introduce you to the men of the The Lupu Chronicles . THE RECLUSE HEIR by Monique Moreau 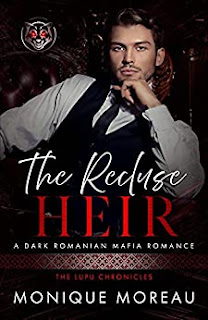 As the second son, I scoff at the antiquated rules and traditions of my clan. When my family needs to make an arranged marriage with a rival clan, the next in line to wed the spoiled mafie princess is me.

I’ll be damned if I’m led to the slaughter like some sacrificial lamb.

Let my younger brother, the family lapdog, do the deed. The man is a soulless bastard, anyway.

But the moment I set eyes on the precious princess at my brother’s engagement party, I regret my decision. My knees almost buckle. Holy hell, but she’s beautiful. Sultry and innocent, she’s a lethal combination the likes of which I’ve never seen before.

If only she wasn’t already pledged to my brother.

My family loves me but I’m merely a pawn in the shifting chess game between the Lupu clan and mine. As the good, obedient daughter to the boss of the Popescu family, I do what I am told. And that is to marry the youngest brother, a ruthless mafie prince with a reputation for cruelty. It’s the least I can do to make up for the grief I’ve caused my family over the years.

At my engagement party, I’m introduced to my fiancé’s older brother, Luca.

A man with cold gray eyes that makes my skin sizzle with desire.

The same man who already rejected me as his fiancée.

I should hate him for it. Instead, the more time I’m forced to spend in his presence, the less I can remember that he is strictly off-limits.
MY REVIEW
Cat has been groomed since birth to become the wife of a mafia boss . Even to the point of staying a virgin until her wedding day . Well things fall apart when at her engagement party she sees the one man that once denied her . The more time they spend together the easier it takes to forget why he was off limits in the first place . Will everyone come out with their hearts intact .
Luca is the black sheep of the family and has been dealt a really bad hand with in the family . He is a strong willed man who really comes off arrogant . Deep down inside he is hurting and just wants the one person he can trust and love . Through out the book we actually see him grow into a somewhat normal man in Cat's eyes .  Cat well she is at first a little naive and kind of starry eyed but mostly she was scared to go into the relationship . She is tired of being a pawn in her families constant negotiating . As she is with Luca we see her go from naive young girl to a strong woman who will fight for her man and the life she wants . These characters are so well written and complex you will love to hate them .
This is a book that once you start reading you can't put it down . The story will suck you in and the characters will keep you interested until the end . This is such a well written story that most of the time will have you on the edge of your seat wanting to know how they are going to survive what is coming next . This book took me two nights to read cause I wanted to take my time cause I was lost in the story and really didn't want it to end . I suggest you add this series to your fall reading list cause this will keep you warm through out the season
Posted by BOOKS TO CURL UP WITH at 11:18 AM