Good morning peeps , its hump day wooohooooo. Today I have the third and final book in the Medium with a Heart series . ORGANIZED MURDER by Erica J Whelton. 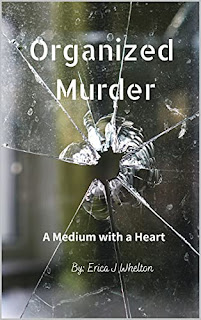 Joanna Webber is back in Book 3, Organized Murder, and putting herself right in the thick of finding a killer.

After her husband Ted’s death six years ago, she is finally ready to visit his grave. Having never been able to reconnect with him in the afterlife, even after regaining her psychic powers, her plan B is to go tell off his headstone. She’s hoping for the closure she has never been able to get.
He surprisingly appears at the cemetery and tells her the truth about his death. The new version includes not one, not two, but three organized crime families. One he worked for, and two that potentially had him killed.
In the end, the closure she craves comes from a place she never expected.
MY REVIEW
Joanna and the gang are back and ready to fight for what is right. Its been six years since her husband Ted has died and finally she can go and visit his grave . Well guess who she sees at his grave his ghost . Where she finds out some truths about what happened when he died . So instead of telling him off she gets embroiled in who murdered him . So now Joanna is mixed up with not one but three crime families . The one he worked for and the other two who wanted him dead.  With the help of detective Clint , the man who has her heart but she denies it . Will they be able find out the truth and stay alive at the same time.
Joanna is well at it again , she is just trying to get over her late husband and get wrapped up in murder again . She is a strong woman but she has been through so much she feels lost . She is trying to move on but there is so much in her past that she has to get through to move forward. When she starts figuring everything out man she becomes a woman on a mission. I love her and her strength. She is one tough cookie and will take on anyone who wants to hurt her family .  Clint is back and yes he is still sweet and sexy and also torn between his feelings for Joanna and trying to keep her safe . These characters are well written and you will care for them .
This is the third book in the series so you are hoping for a big story that will tie everything together and keep our main characters safe. The author throws a lot at them in this book. Which you are on the edge of your seat for and you want everything to work out . I feel that there is a lot more action in this book . I will admit there are a couple of things I wish the author would of done a bit more . I wish she would of brought the two main characters together a little sooner in the book . I know I know let them have their happily ever after but I wish it could of happened a little earlier .  The twist at the ending was good who knew . Not going to tell you that one you will have to read to find out . Over all I really enjoyed the last book in the series . I am going to miss these characters . So if you want a fun series check it out
Posted by BOOKS TO CURL UP WITH at 8:04 AM