Good morning my peeps today is release day for Robyn Peterman's newest book. ITS A MATTER OF MIDLIFE AND DEATH  the sixth book Good to the last death series a paranormal woman's fiction 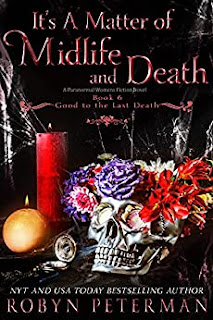 Midlife is madness—magical, messy and one freaking crisis after another.

With a new job I didn’t apply for and an extended family I didn’t know I had—midlife has become somewhat problematic. Gluing ghosts back together is easy compared to my new celestial occupation.
The Grim Reaper wants to put a ring on it. Tim wants to be a father. Candy Vargo has lost her damn mind and Jennifer thinks we’re all sparkly vampires. I’ve been given an impossible task with catastrophic consequences for failure, but it wouldn’t be my midlife without another crisis.
What’s the saying? When in Crazytown, embrace the insanity or go insane. It’s time to lean into the madness. I’m putting down roots, pulling up my big-girl panties and getting down to business. With one month to succeed, it’s time to grow a bigger pair of lady-balls and play in the big league.
The rules are unclear. However, when it’s a matter of midlife and death, I’m making the rules. And I will win.
MY REVIEW
Daisy and the guys are back and funnier then ever. How the heck are they going to help the angels find their humanity and it is quite a task to teach them . Daisy and the gang have only a few days to do this or her baby will be born with no chance of surviving . Zadkiel is really playing with fire when he threatens Daisy and the baby . Gideon and the gang will do anything to keep baby girl safe . Even teach the angels how to be human. Will they get the hang of it before they kill each other or drive Daisy over the edge .
Daisy and the gang are back and more hilarious then ever .  Daisy is working hard to be the angel of Mercy and man does she have her hands full.  Between the angels and the poor ghosts that have showed up . Life just gets better and more chaotic for this family of well lets call them misfits . Gideon is a grim reaper but when it comes to getting ready for baby he really does become a first time dad basket case . Candy well she is still the f bomb dropping tooth pick chewing woman . They are such fun characters to read and laugh with
This is the sixth book in the series and I read it in an evening the author has a fun way of putting her characters into such interesting scenarios with hilarious out comes . The story is fun and easy to read . There are moments in the book that I felt kind of dragged and there were phrases that were over used . Over all I truly enjoyed the book and can't wait to read the next book . So if you want a fun book check out this series .
Posted by BOOKS TO CURL UP WITH at 7:29 AM