Today I have a 3 in one story for you . They are three novellas in one great book .  WOLF BITES  by Linda Thomas - Sundstrom 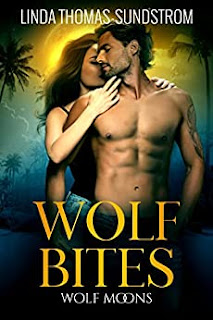 Possession is nine-tenths of the law... But does that apply to the Moon's hold on her creatures?

Deputy D.A.Dylan Landau's complicated and secretive life as a werewolf gets tougher when fiery Officer Dana Delmonico encounters him on a side street, under a full moon, tweaking the fine balance between werewolf and human, love and lust, forbidden sex, law, and the meaning of being Other.

Fairview Hospital is famous for treating personality disorders and anomalies...

But when Detective Matt Wilson's sexy former lover, Doctor Jenna James, calls for his help, will Matt be able to face the woman he still craves and help with this case, or is he to become... wolf bait?

In the secret war between humans and werewolves, Jonathan Baird and Nikki Reese are natural enemies. But when the hunter becomes the hunted, will an all-encompassing passion bring the two rivals together... or will that passion make them both targets in a deadly secretive game?
MY REVIEW
Welcome to Miami where werewolves and humans mix together. Where we find some of the sexiest men and the women who love them and the secrets they have hidden in the dark . These three stories have it all . Mystery a bit of romance and well sexy werewolves .
In Black out we meet Dylan Landau who's life is very complicated and about to get even more complicated when he meets Dana Delmonico who is in the thralls of her first change. He is drawn to her both his wolf and him as a man . She doesn't know what is going on and why she is attracted to this man . Will they be able to get through the night and get her help to understand what is going on . Or will they let their desires to over take them .
These two were the the first couple that I fell in love with in the series . They are both so well written and complex . I love the way that Dylan fights his attraction to Dana but you can see the pull she has on him . Will the night end the way they both want you will just have to find out .
In Wolf bait we get to meet detective Matt Wilson and Dr. Jenna James who is a doctor at a place where people go for personality disorders . When he is called he finds someone who he knows all to well is in the first change and being caged up is hurting her . When he sees the doctor and his former lover . Things get a lot tougher for both of them . When they both find out that they are werewolves things get hot .
Another great couple that are so well written you will fall in love with both of them . You will be fanning yourself by the time you are finished this one .
In Moon Marked we get to meet Jonathan Baird and Niki Reese . Enemies that should be as far away from each other as one can get but when the hunter now becomes the hunted . Passions erupt and can't be denied anymore . When the secrets are lifted they are meant to be together .
This is the fast paced action book along with a very hot romance going on . The characters are so complex and they are the couple that you really want to be associated with . You almost have the enemies to lovers line going on through out this novella . There are twists and turns that will have you on the edge of your seat and when they get together well it gets really hot .
This is a great group of stories in one book . We get to have some back stories on some of favourite characters from the series . I must say that this author has a way of taking her characters and putting them in such difficult situations and getting them out of it . Her idea of a werewolf is original and you will like them . They are complex and well written . There is steam in these books which could make you blush . I was happy to get the back stories of these characters and now you know how they tick better and we get to see them usually in the first change . So if you want a sexy books with three hot men and the women who love them . Check it out I promise you will not be disappointed .