Good morning peeps hope everyone is doing well . I myself is happy to be back after a few mental health days , yes sometimes even book lovers need a few days away from all things book. But, I am back and ready to get going again . Today I have the third and final book in the Here to There series . HEIR TO A DISTANT LAND  by Hp Mallory and J.R Rain 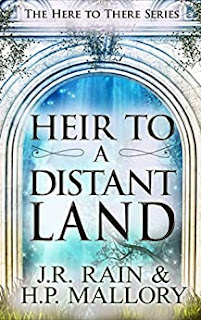 After barely escaping Sherinford Boku, Elle and Patch find themselves alone in the forest with no idea where to go next.

But so are Spyder and Carl the Gray…

And Simon still appears to be possessed by the dark god, Seligar...

MY REVIEW
Elle and Patch have escaped and now they have to figure out where they should go. There is one good thing her best friend and protectors are looking for them. But there is also the assassin and the king that are trying to find them also and oh yeah don't forget the man Elle is betrothed with is possessed by a dark God named  This is just the start of the day for Elle and Patch will they survive and get back to each other .
Ok I am going to say this Elle drove me crazy in the first two books , she just came off air brained and really kind of whiney but she actually redeemed herself in book three. She became the strong character that we are hoping she would . Patch is back and well he is kind of lost in this book, He is still the strong sweet guy who just wants to protect Elle.  He is conflicted he knows he needs to let Elle go but in his heart he loves her and really doesn't want to let her go . He is such a sweet man who wants love and to be loved . Simon well he is just awful turning evil when he is possessed by the dark God but deep down inside I think that he could of been a little dark all along . Each character is well written and complex. They grew through out the series and you will like them .
This is the last book in the series and I must say the authors did a good job wrapping everything up . It was a fast read and you honestly felt like you were in the middle of the action . The story is fast paced but didn't lack in any way . I really like the writing style of each of these authors on their own but together they can build an universe that you really want to visit . So if you like fantasy check out this series . Add them to your summer reading list .
Posted by BOOKS TO CURL UP WITH at 8:15 AM