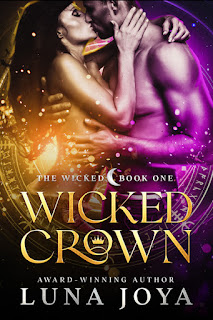 She’s not who—or what—she appears to be. Neither is he.

Supermodel Vori would be happy to stay in the human world, blissfully ignoring her true nature. But no. The blood vow she once made requires her to return to the Goblin Court. And since going alone would mean consenting to an arranged marriage, she needs a fake husband. Someone no one would miss if there was an unfortunate…accident. Vori knows the perfect villain for the job.

Witch Perry used to be a hotshot lawyer. But that was before he made all the wrong choices, wound up in league with a demon, and was left to rot in prison. Now, he has a second chance. He can finally earn his redemption. Too bad his last hope is the woman he ghosted two years ago.

It’s not long before Vori and Perry realize they aren’t as different as they thought—and that the line between enemies and lovers can be razor thin. But if they want their happily ever after, they’ll first have to stop a supernatural killer and survive a royal smackdown. Should be easy for a goblin princess and her dashing antihero, right?

“I’m not the consort you need.”

She should let it go, let him go, but she couldn’t. Closing the space between them, she tapped into his powers, a gesture that’d become so familiar in the last few days. His magic was muted beneath her touch, a steady, reassuring hum. “You’re the one I want.”

He snagged her fingers between his. “Don’t, princess.”

Her title usually grated like the pinpricks of unfinished tailoring on coarse fabrics. With him, it slid over her senses smooth as silk. The slight command in his voice called to a part of her that needed him to do it again. To dominate. To rule in his own way. To spark those powers over her skin and see what heat he could send through her before she devoured the magic one slow pull after another. “Don’t what?”

“Don’t tease with something I already crave. One taste was bad enough. Any more and I won’t let you go.” There it was again. His demanding insistence calling to her.

She angled her head so the slightest shift by either of them would bring her lips to his, a dare to provoke him into unleashing the sexiness that flashed beneath that straitjacket control. Anticipation zipped through her as much as his powers ever did. What would it be like to let him take over, hold her down, and use that lawyer voice to say filthy, delicious things to her?

The noise he made in response had her body tightening and tingles rushing through her. Had she siphoned his magic without trying? Impossible. This was her response to him, to that carnal and oh-so-masculine sound, to his scent, to his nearness.

She’d made the first move before. She could do it again. Tip-toe him to the edge until he either pulled away or committed to being all in. A soft kiss. Just a tease of what could be. If he would only stop thinking so damn much. Whatever hell he was putting himself through, the torment was etched in the tight lines around his mouth, the clench of his jaw, the strain in his shoulders.

“Princess.” His voice was rough, a damn near growl. Perhaps she wasn’t the only one with a beastly side in this room. The question was how to snap that control of his that had him bound.

Good thing she could pick any lock.

“Choose.” She pushed enticement, urgency, finality into a single word. A sharp pick.

She pressed her breasts against his chest. The hook.

Letting the stillness swirl all their sexual tension to a fever-pitch, she waited for the pressure to catch against the barriers he’d put between them. Click. Click.

The imaginary pins lined up in her mind, snapping into place and pushing against her in a resistance that couldn’t hold. Click. So close to release.

“I’ll always choose us.” He curled his hand around her neck, hauled her close, and claimed her mouth in a kiss that left no question as to his certainty.

Damn, her witch could kiss. It was a possessive, bruising explosion of a kiss. None of the hesitation or uncertainty of before. Gone was the restraint.

He demanded and took, and all she could do was race to catch up as his hunger hurtled them both toward something that had been building since they met. She did the only thing possible. She kissed him back with everything she had.

Perry ran his hand along her back, catching his fingers along the column of buttons. “These will be fun.”

“Where’s a goblin gown when you need it?”

“You should have one of those in every color.” He pressed his mouth to her jaw, sending a shiver through her. “How much time do you think we have?”

His wicked chuckle slid along her skin, chasing the chills with heat. “As I was saying before, I want to spin you around, undo each ladylike button, and press my lips against the skin as I unwrap you inch by inch.”

Her temperature kicked up yet another degree. Of course, the man who never stopped thinking or talking would narrate his intentions—however naughty. “Dirty talk. My favorite.”

“The filthier, the better.” The last word caught in her throat on a moan with the way he cupped her breast and grazed his teeth over a particularly sensitive spot. He was so warm. And solid. And decadent when it came to kissing.

He moved as if they could slow time, circling his fingers around those damn buttons the way she wanted him to trace her skin. “Mmm, I’ll have to reconsider my position on buttons. These have possibilities.”

“That you can test later. Stop tormenting me.”

“I haven’t. Not yet. I’m still being a gentleman.” One who had her wet and wanting.

Their first kiss had been hours ago and years in the making. Now, she wanted all of him. 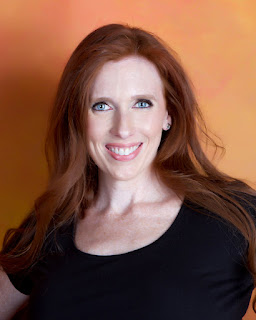 Fluent in sarcasm and penal code, Luna prosecutes by day and writes at night. She loves history, especially Los Angeles and Hollywood lore.

A survivor of traumatic brain injury with steel body parts, she lives in SoCal with her combat veteran husband and their two-pound terror of a rescue pup.

Find more about Luna Joya on her website: https://lunajoya.com/

Rafflecopter:
​a Rafflecopter giveaway
Posted by BOOKS TO CURL UP WITH at 12:38 PM