Good morning peeps , hope you are staying cool this week and finding lots of good summer reads . Today I have book 2 in the Gates of the Underworld . RELICS OF RUIN  by Hp Mallory and J.R Rain 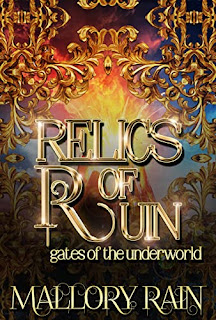 In this case, ‘Dodge’ is the First Gate of the Underworld, which is like the sister city to Level One, Hell.

But it’s not like I can leave anytime soon—not when Adonis, my only friend (who’s also super hot), just got dude-napped by the absolute worst queen in the history of queens.

No, I mean it. Azrhea puts Bloody Mary to shame…

Anyhoo, even when I’m given the chance to escape and head to the Second Gate of the Underworld, I don’t take it.

Not only do I want to rescue Adonis from the clutches of She-Bitch, but I also sort of, kind of made a promise to Ereshkigal, the original ruler of the First Gate, that I’d help her reclaim her kingdom.

The only problem is Azhrea is proving really freaking difficult to kill.

And when Hades, the God of the Underworld, decides to make an entrance, I really don’t know what to think.

Hades is the ultimate definition of ‘man-perve,’ but he also seems to strangely want to help me. At least, I think he wants to help me…

He warns me that Rurik, the keeper of the Second Gate, is going to be even tougher to vanquish than Azhrea. And getting rid of Azhrea is like trying to get rid of ants.

But the biggest takeaway from my meeting with Hades? I must beware of Ares, the God of War, who occupies the Fifth Gate of the Underworld.

Ares is currently keeping my sister’s soul hostage as he waits for me to make my way through the other four gates, so he can have the honor of killing me and starting a war with Olympus.

I’m really hoping I won’t give him that satisfaction…

MY REVIEW
Penelope is trying to rescue Adonis and get through the first gate but Azhrea will not die . It takes everything Pen has to defeat her . Not that she has enough to do Hades decides to come into the picture and warn her about Ares   Pen is trying to figure out what Hades is up to  and why does he want to help her also trying to get her only friend free so they can travel to the second gate . The life of a demigoddess will they survive the next gate keeper and will Pen figure out what Hades is up to before it is tooo late .
Penelope and Adonis are back and still fighting for their lives .  She is still struggling at the beginning with her self worth at the start of the book but man once she realizes who and what she is . Look out under world . Her powers are growing leaps and bounds daily . Adonis is well he is fighting hard trying to get out Azhrea's thrall . He is becoming over protect of Pen also . He is such a good guy .  I will admit that these two characters are really starting make me fall in love with them . They are well written and becoming very complex characters .
This is the second book in the series and starts right where book one left off . You are thrown into the action and basically fighting along with them all the way through the book . The characters are getting more and more complex. This is a fast paced story and you will be on the edge of your seat most of the time . The authors paint a great picture and the world they painted really starts to come alive through out the book. You have all these questions popping up through out the book like will Pen get through the first gate . What will happen next with Hades and Ares . Will Adonis really be safe from Azhrea . It almost feels like a great Greek mythology soap opera. So if you want a fun filled series check it out .
Posted by BOOKS TO CURL UP WITH at 7:44 AM