Good Friday all  hope you are getting ready for a great weekend  we are rainy and cold here so I found some good books to read for the weekend . Today I am gong to review  KNIGHTS OF THE DEAD by I.J Smith. 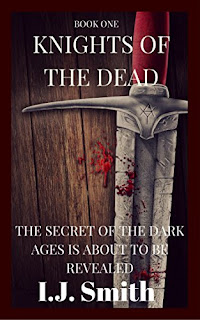 Long ago there was a period of time known as the Dark Ages. Finally the truth of those years are revealed. Will the Zombies rule or will The Knights win the war.

MY REVIEW
This is a wonderful twist on the zombie story, It is set back in the dark ages with knights and kings, fair maidens and well zombies . I know when you are thinking knights and kings  you think quests and fighting each other for the king . But what would you do if the army you are fighting are the army of the dead . Randoul and his companions are up against the dead of the night. Will they survive the onslaught of the dead or is the war just starting .
I really liked the way the book started out right in the middle of the action . The author puts us in the middle of the battle as our mighty knights fight their way out.  We are introduced to some really great characters .  They are very strong and complex and each of them are very different in so many ways. Each character has their own strengths and weaknesses . You see them go through a lot during the battles with the help of a witch Randoul is shown some disturbing visions thanks to the witch . I really like all of the characters and what they go through . Which is a lot .
This is a really fast read  I read it in about an hour and it was a great fast read . The twist on the zombie story who knew you could combine zombies with knights . It is such a cool idea. The action is fast paced and started basically at the beginning and doesn't stop until the last page . There is a twist ending and it is a cliff hanger because this is the first of the series . So if you want a great story that has a great zombie twist. Check it out you will not be disappointed .