TODAY WE HAVE A SPECIAL TREAT FOR ALL OF YOU

Good Wednesday everyone today we are reviewing EMBRACE THE DAWNING by Betty Shreffler.  She will be on the blog page later to do a take over and I can't wait to get to know her more. 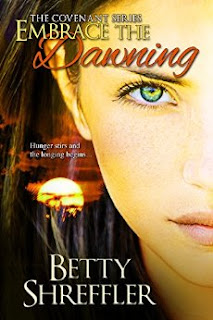 Kayci Pierce possesses strength, endurance, and accelerated healing that set her apart from normal humans—traits she's never understood and kept hidden since childhood. She feels disconnected from the seemingly normal world around her—until she's attacked by a creature she didn't know exists and then rescued by a stranger she can't forget. Dreams of the attractive, dangerous man haunt her and lead her into a world she was born for.

Adrian Spade spends most of his solitary nights hunting rogue vampires for the Covenant, until an undeniable attraction leads him to reveal his vampire identity and risk his life by saving Kayci's. Tempted by her mysterious nature, Adrian finds himself drawn to Kayci and becomes her protector while she discovers her heritage and what it means to be a half-breed vampire sorceress.

Kayci's relationship with Adrian brings her as much passion as it does danger. Now with a vampire revolution beginning and a romantic connection to a full-blood vampire, Kayci must work with Adrian to survive surrounding threats. As Kayci tries to make sense of an unfamiliar world, she's forced to choose between the life she's always known and her vampire birthright.

MY REVIEW
Embracing the dawn is the first book in the series and follow kayci a young woman who is special but doesn't realize how special she is yet . On an evening run she is attacked and brutally attacked. I swoops and saves her . Adrian is a vampire who hunts rogue vampires and spends most of his time alone.  When he saves her he knows there is something different about her and become her protector as they find out what and who she truly is .
I really liked the characters in this book . Kayci is a real likable woman who always knew she was different and she embraced that difference.  You really see her change into a kick ass heroine that is trying to embrace what she turns into . She is very relatable and likeable and her mistrust is well placed she just doesn't know who she could trust . Adrian is oh so sexy and hot, he is a recluse and he finally feels alive when he meets Kayci. He is a true alpha and feels like protector towards Kayci. As the story you see him grow and becomes more to Kayci.
Kayci has a best friend Elise who is her best friend and confidant . They are so good for each other its a two way street . They tell each other everything and help each other out . They are true best friends. They also meet and pick up new friends and alliances along the way . As they figure out what Kayci's new role is in the world of vampires.
I will say I really liked this book and loved the characters . They are well written and complex . The author takes us on a roller coaster ride of emotions. This is a great first book in the series . I was up all night long reading . I was on the edge of me seat a few times and had a few giggles along the way . There are a few places where it seems to drag just a bit but over all this is a fast paced book . If you love vampires and all things paranormal this is the book for you . Check it out and right now its free on Amazon.  So get it and enjoy
Posted by BOOKS TO CURL UP WITH at 8:45 AM