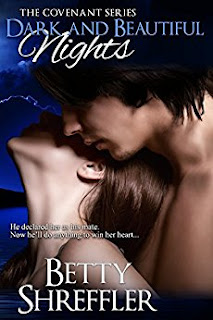 One man will fight to keep her love while the other will do whatever it takes to win it...
Devotion keeps Kayci longing for Adrian's return. Dark magic is the only way to free him and its cruel seduction has captured Kayci in its embrace. Cassius, unwilling to lose the one thing he's longed for—his mate, fights for Kayci's heart and saves her from her biggest threat… herself.
Pulled between unrestrainable desire for Cassius and her devotion to Adrian, leaves Kayci suffering from the worst battle she's ever encountered…the one for her heart.

Excerpt:
DIRECT LINK TO EXCERPT: https://bettyshreffler.wordpress.com/2016/10/03/excerpt-dark-and-beautiful-nights-the-covenant-series-book-three/
Cass took the glass from her hand and sniffed it. “What is it?”
Kayci shrugged. “The bartender is a witch. He makes it. It’s blood with some kind of potion in it. It makes me feel amazing.”
Cass studied the contents. His eyes drifted over the glass to her. “That’s my job.” He saw the arousal sweep over her face and it awakened his instinct. Yes. Your mate. Yours.
Kayci took the glass back from his hand and gulped it down.

Cass leaned on his arm. “Tell me, Kat. How’d you end up with pretty boy?” He motioned to Brad, sitting with his buddies, scowling at him.

Kayci rolled her eyes. “I met him a couple months ago, when I first starting using dark magic. I fed from him then. I ran into him again last night.”

“You sleep with him?” Cass asked, avoiding eye contact with her. He chugged more beer as the rising jealousy tightened his gut.

Author Bio:
Betty Shreffler is a self-proclaimed nerd and nature enthusiast obsessed with folklore, photography, writing, reading, movies, board games, hiking, gardening and spending time with her husband and five fur babies. Not necessarily in that exact order though. During her outdoor adventures she's been face to face with an alligator, a bear and a coyote, making for some of the most memorable experiences of her life. She loves to capture and share the world's beauty through the lens of her beloved Nikon camera. Her work experience has been diverse from working as a Ranger for the National Park Service to management positions in Fortune 500 companies. She’s lived in four different states and moved homes twelve times. She received a BA in organizational management and minor in sociology, although her heart has always belonged to writing and photography. Growing up, she read romance or supernatural novels and jotted down poems and short stories to express her emotions and alleviate the characters' voices in her head. Not much has changed, only now her stories are lengthier and her characters more interesting.