Good Thursday everyone , hope you are all staying warm and not traveling anywhere . Today we are going to review ONE MORE RUN ( The Roadhouse chronicles #1) by Matthew S Cox 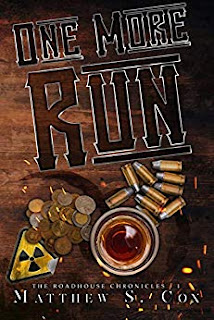 In August of 2021, they tried to disprove the adage that violence doesn’t solve anything—by killing everyone.No people, no problems.Fifty years later, humanity has emerged from the ashes. As if nuclear war didn’t do enough, a cruel virus followed on its heels, reducing many survivors to mindless killers.Drivers are the only link between scattered towns. Anyone with the skill to maintain a vehicle (and the balls to hit the road) can seek fortune and glory running jobs for the Roadhouse.Kevin longs to trade in his steering wheel for a Roadhouse of his own, no longer the idiot dodging bullets for a handful of coins. He’s one run away from retiring when a strange woman begs him for a ride to Harrisburg. Desperation has a way of getting a man to do stupid things, like running a package so valuable half the Wildlands will come after him.All his life, Kevin cared mostly about himself—and his car—yet this woman makes him wonder if there’s more to life than selling food, booze, and weapons to reckless fools.Her past comes calling, leaving Kevin at a fork in the road: fulfill his dream, or let it go for something he never thought he’d want: love.

MY REVIEW .
What happens after a nuclear holocaust well fifty years after the destruction . People have emerged from the ashes like phoenix rising .  We have the drivers the only links between the towns and road houses that are scattered around the country.  All Kevin wants to do is get enough coin to get his own road house and retire . Until the day Tris barrels into his life . A young woman kidnapped and fighting to stay alive .  Together they start down a road that will either have them killed or get their happily ever after .
I must say the characters in this book had me hooked from the very first chapter . They are so well written and complex. Kevin kind of reminds me of a mad max character . He is grumpy ,and only out for himself . He has been hurt and just wants to go on his runs get the money for his road house .  As you get deeper into the story you really see him open up and even though he is gruff and stoic . You see him become more of the man he use to be and the man his father was hoping for . I truly liked him  and was crying and laughing along with him through out the book.  Now Tris you really felt for her , she was so confused and scared when we first meet her . But as you start to get to know her you find out she can really kick butt when she needs to . She also seems to be the cricket  conscious that is really opening up Kevin to doing good for the people they run into . There is also a little bit of mystery to Tris is she and android or is she a real living breathing woman . That is for you to decide and whatever you choose will be ok .  I must say I truly liked these characters by themselves and as a couple they could beat the snot out of anyone that messed with them .
When I started reading this book I was what did I get myself into . The book had me hooked by the time I was done chapter one . The story has so many twists and turns that kept me reading for hours . The characters are well written and complex and you can't help but like them. You will also want to punch them and yell at them cause they are doing something really stupid .  The book has a Mad Max feel to it and it also has some zombies , yes I said zombies . They really add to the story .  I really liked this book and can't wait to read the second book in the series . So if you want a book that will keep you reading all night long and send you to the apocalypse . Check out this series you will not be disappointed .
Posted by BOOKS TO CURL UP WITH at 8:30 AM