Well it is day two of my birthday week and I have a new book for you by an new to me author . SONG OF BLOOD AND STONE by L. Penelope . 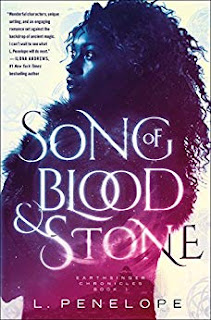 Orphaned and alone, Jasminda lives in a land where cold whispers of invasion and war linger on the wind. Jasminda herself is an outcast in her homeland of Elsira, where her gift of Earthsong is feared. When ruthless soldiers seek refuge in her isolated cabin, they bring with them a captive--an injured spy who threatens to steal her heart.
Jack's mission behind enemy lines to prove that the Mantle between Elsira and Lagrimar is about to fall nearly cost him his life, but he is saved by the healing Song of a mysterious young woman. Now he must do whatever it takes to save Elsira and its people from the True Father and he needs Jasminda's Earthsong to do it. They escape their vicious captors and together embark on a perilous journey to save the land and to uncover the secrets of the Queen Who Sleeps.
Thrust into a hostile society, Jasminda and Jack must rely on one another even as secrets jeopardize their bond. As an ancient evil gains power, Jasminda races to unlock a mystery that promises salvation.
The fates of two nations hang in the balance as Jasminda and Jack must choose between love and duty to fulfill their destinies and end the war.

MY REVIEW
Jasminda an orphaned girl living in a land that has whispers of invasion  and war . She is an outcast from her homeland of Elsira because she has the gift of Earthsong . When the soldiers take over her cabin she is captivated by a young man who she heals . She and Jack are thrust into a fight for the land and to stop an evil force that's is trying to take over . Will they be able to save the nations and come out the other side with their hearts intact .

I truly liked the two main characters , they were written so well and they are complex . Jasminda is an outcast but you see her strength and character . She is tough but also sensitive . She just wants to be left alone in her cabin . She thinks that no one would want her because of her gift . As you read you really watch her grow and become a kick butt character . Jack is a soldier and a prince and a man of honor . He helps brings Jasminda into force to be reckoned with . He is smitten with Jasminda but deep down I think he knows that duty might rip him away from her . There are a lot of supporting characters that help and hinder the main characters on their journey to end the wars .

I sat down and started reading this book . I was blown away on how beautifully written it was .. The author takes us on an emotional journey where duty and love collide . The characters will take your breath away they are complex and well written . You will fall in love with Jasminda and Jack  and cry and cheer with them . There is a mystery and romance through out this book  . But I did feel that there were parts of the book that did drag a bit . I felt the last bit of the book could of had more fighting and a bit more action to bring the ending to a resolve . Over all I did love the book and would recommend it for your summer reading list . So check it out .