Well its back the dreaded MONDAY  today I have a new to me author Jane Suen and her 2 book series . FLOWERS IN DECEMBER and COMING HOME . 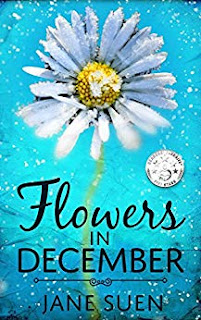 Readers’ Favorite gave FLOWERS in DECEMBER five-stars. “Someone who knows what it's like to lose a parent will find a lot to relate to in this book.”

A MAN GOES HOME TO BURY HIS MOTHER BUT FINDS HIMSELF.

Connor Norton returns to his hometown, following the death of his mother, knowing that he will have to confront personal feelings of guilt and regret. It is a place he has barely set foot in for the past 20 years.

Caught in the period of his life where the vibrancy of youth has diminished and the prospect of becoming middle-aged is looming, Connor finds that he is suddenly alone in the world and must somehow reshape his future and face his own mortality.

With only Tom, the family’s orange tabby cat, as his constant companion, he considers new possibilities and new directions. But will Connor be able to lay the ghosts of his past to rest? And will his return later, to the place he once called home, be enough to let him break free from the remorse which he has carried since he was 18?

In this tender, heartwarming portrait of a man who finds himself trapped between his past, his present and the future, where will this new journey lead Connor and what will the future hold when he gets there?

MY REVIEW
When Connor comes home to bury his mother , he finds more then just the memories of his mother . He finds himself in the process .. Through the friends and family that surrounds him and helps him through .
The characters in this book are well sweet and kind . Conner is well he is just a guy who works hard and hasn't been home . He is wracked with guilt over things that have happened .  Eva and Mary anne are sweet characters that come and help him . My favourite character is Tom the family cat he is just well a cat .
This is a sweet story about a man that finds himself through sorrow . I did like this book and yes there is a but coming . I honestly can tell you that I really didn't dislike this story but there are parts of the  book that came off really naïve and other parts of the book that had great potential .  Its a very short book so there is potential to build on the characters and the story line  Over all I did enjoy the story and the characters .and it would be a good beach read for you summer reading list . 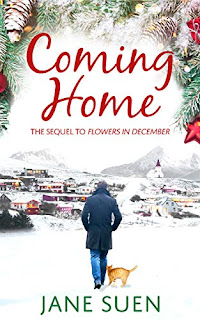 Sometimes you have to leave home to find your way back. To one small town. One magical Christmas.

Connor Norton returns to his childhood home for the holidays, still grieving after his mother’s recent death. Tom, her orange tabby cat, is with him.

He runs into Alana, the estranged daughter of his next-door neighbor Dottie who is struggling to come to terms with the devastating secret that tore her family apart.

Mary Ann has everything she wants … except for that special someone. Now Connor’s back in town, but is he too late?

Hope, love, and the power of forgiveness. Anything can happen—when you least expect it. During one magical holiday, their lives intersect in a way that changes them forever.

In book two its has been 4 months since Conner left for the city with Tom.  Its Christmas eve and all Conner wants is to spend time with Tom and just grieve for his mother  when he runs into the estranged daughter of his mom's neighbour, Alana who is back in town to heal the rift between her and Dottie. Mary Ann has it going on right now her floral shop is doing great and she want more but the one she wanted has left her for 4 months and she is moving on . Here is to hope love and second chances .

The characters in the second book are getting better  They don't come off as naïve as they did in the first book . Also other characters are up front and taking charge in this book . Alana is the young girl from next door but she has had a hard past so you can feel it. and Mary Ann actually has a big part in this book also . She is torn between two men , the man Ron who was around for as long as she can remember and the man, Conner who just up and left her . You really see her grow in this book .

The author ties this story in with the wonderfulness of Christmas .I will say I did like this story a lot more then book one . Yes there is a but coming , I just wish the author would evolve the characters more . There is so much more that the author could do with the characters and also the Christmas season . I did like the story line and I do love Christmas . This is a very fast read good for the beach so if you want a fast read check it out .

Over all I did enjoy these books and would like to say if you are looking for a fast summer read you can add these to your summer reading list
Posted by BOOKS TO CURL UP WITH at 11:28 AM