WOOHOOO IT IS FRIDAY

Welcome to Friday , today I have the third book in the Paragon Trilogy . HEROE by Bree Lewandowski 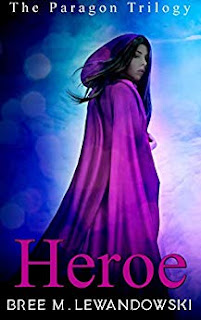 The war rages on, but it must end.
Meridionalis lies in ruin, but the royal city must not fall.
The question "why" remains and answers must be found.
Destruction and bloodshed follow the Rubiconds as their rampage continues. The royal city of Geneva is the only stronghold that remains. But it, too, will be annihilated if a compromise is not reached.
Sailing to the land of Rubra, Kohl, Saya, Linah, and Abra seek out the dictative emperor to beg for mercy on their lands and an end to the fighting.
Failing, orders demand the men return prepared for combat, leaving their wives to be escorted to safety.
Until a secret letter finds its way to Abra revealing the true cause of the war.
Taking matters into their own hands, the women band together, armed with the insightful knowledge that swords and blood-spilling are not what will bring the war's end. Time is fleeting, but the women's stamina to complete their mission endures.
Fate's a funny thing, but can be altered with a woman's touch.
Secrets are revealed, solutions are presented, and promises are kept in this final chapter of the saga!

MY REVIEW
War is raging and the Meridonilas is lying in ruin as Kohl, Saya, Abra and Linah are heading to the island of Rubra to plead for the people of Meridonilas . But the men are called back to help defend the capital city and the women take matters into their own hands and band together to do a mission that will take them to places unknown . Secrets will be revealed and solutions will be put in place and the couples will have their happily ever after

The characters just keep getting better and in the last episode , you really get to see what Linah and Abra can do . They come out strong and resilient. They take on lots of different people and problems which they fight head on . The guys Kohl and Saya are battling their own demons saving the capital . I must say the character really became complex and are so well written . They are a really strong team this time . I really liked the characters in the past two book but in this book I truly fell in love with all of them .

The last book in the trilogy I believe is one of the better written books . The author has us on the edge of our seats the whole time . The twists and turns in this book are great . You will not put the book down until you are finished . There is a lot of action in this one .  I truly got lost in the story and loved the characters . So if you want a great series for the summer reading challenge . Add this series .
Posted by BOOKS TO CURL UP WITH at 8:42 AM