WOOOHOOO IT IS A GREAT DAY

Well today is the big day the day I came into this world . And I have a great book for you to read . He is one of my favourite authors .  THE HAND OF RAZIEL by Matthew S Cox 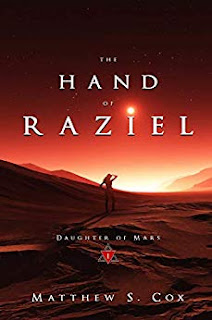 Risa Black will decide the fate of an entire planet. After all, an angel told her so.

Orphaned young, she grows up among the resistance, fighting to give the people of Mars command of their own destiny. Two governments from Earth vie for control of the Red Planet.

She wants them gone, regardless of how many explosives it takes.

To the outside world, she’s an emotionless, broken marionette. Inside, her father’s fiery end haunts her every waking moment. She never cared for destiny or politics, until the angel
Raziel focused her anger. Both friend and foe alike believe her grip on sanity tenuous, but she knows he is real, and pities those who will never feel his divine presence.

Whenever her adrenaline wears off, guilt at what her bombs did cuts deep, as does the apathy of the citizens she fights to liberate. The pain worsens after unexpected love cracks open her armored heart, causing her to question the role she plays in the bloody conflict.

Torn between duty and desire, she learns change never comes without loss.

Even to the Hand of Raziel.

MY REVIEW
What would you do if you have to decide the fate of an entire planet in your hands all because and angel told you . That is what is happening to Risa Black a young orphaned girl who wants to stop the governments from Earth from taking over Mars . To some she is a ruthless broken doll but underneath she is fighting for her life and for the lives of others like her, Will she be able to change the outcome of her lonely life or will she give into her darker side .
Risa's character blew me away, she is so complex . You really don't know her age some moments she is waif like and child like and the next moment she is kicking butt and being the lead in the resistance . She has cyber genetic parts of her that make her well basically a killing machine but there are still the human parts that are waging a war inside her . I wanted to hug her and wrap her up in a blanket and say everything is going to be ok.  There are so many characters in this book that we think are friends to Risa but alas some of them aren't . Garrison is one of those characters that you really want to like but you just don't trust him . It feels like he is hiding something . You really need to watch him he can play you really well . All the characters are so well written and complex you will love them and hate them at the same time.
I sat down and started reading about Risa and next thing I know I am done . I couldn't put the book down . Risa and the gang had me sucked in by the end of chapter one . This is a great  fantasy/ steam punk story . It really has the feeling of TOTAL RECALL  you can imagine the people and places on Mars set up like a trade center with lower cast people living down in the dirt and the upper class living high in the sky . The author can paint a picture and put you in the middle of the action . I was on the edge of my seat for most of the book . So if you are interested in a great book to add to your summer reading list this is the book for you , Add it today