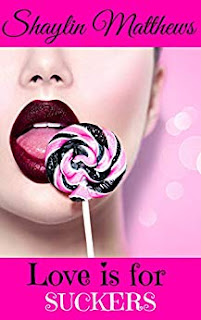 Who loves sex, avoids commitment and is too nice of a person to put her hot mess of a self into any long relationship? Legend "Gen" McGowan. Executive Secretary by day and escort by night, she knows who she is and is proud of it. She loves men in general but there are only two men whom she actually lusts for...her best friend Royce and her boss - too bad they are both in relationships...with each other. Not that it matters Gen has a motto that she allows to rule her life. Love is for suckers and that's something she will never be. Living her two separate lives gives her the excitement she needs and the sex she requires until the day wall comes down. Her secret is out, her worlds collide and the proposition she's offered is hard to refuse. As much as she adores adventure this one has the potential to change her life forever.

Trevor "Cutt" Westcutt isn't known for anything besides getting what he wants and as a corporate lawyer that's a good thing, but to get what he wants now he's going to have to soften his touch. His roommate / friend / lover Royce Collins has been eating his heart out over his best friend Gen for years, The man convinced him to get her a job at his law firm where she has spun her magic and now he wants her too. Royce has always been a true believer in Gen's motto but something tells him that things could be different with the power of three. It’s time to put this plan into motion. It will either work beautifully or make suckers of them all.

Warning - this book includes hot lovin by all parties mentioned. It is intended to be read by people who have open minds, open hearts and likes to feed their need for naughty.

MY REVIEW
When you love sex , you become an escort , that is what Legend has done and she has been having the time of her life . Until the day that she is set up as birthday surprise for someone special . Cutt decides to surprise the man he loves with the woman that they both secretly love and want . After a night of fun times and maybe a few misunderstandings , they become more then friends and worker boss . But with all great loves will they be able to keep their love strong to get through jealousy sink them before they even get started .

The main characters are well written and complex . Legend , what can we say about her  She is feisty and so very strong willed . But she is also convinced that love doesn't exsist and if she doesn't let herself feel she won't get hurt .
Royce is the sweetest guy you can meet , he loves both Legend and Cutt and wants to have both of them . He is also the sensitive one and takes it upon himself to try and fix things when they go wrong. He is the glue that holds the three of them together .
Cutt well he is technically the alpha of the three of them . He knows what he wants and he wants both Legend and Royce. He is a big believer of having something for awhile and then letting it go
. What draws these three together is that they all don't believe in love or let me rephrase that . They are all holding themselves back from finding the love that they all deserve .
This is actually a quick dirty little read , but what i did like about it ,it had a story line behind all the sexy fun stuff. There were parts though where i felt the characters were struggling to get their stories out there . There were some parts too that felt like they were a little choppy . The characters I really liked them and wished that we got to have just a little bit of more of a back story to them . Over all i really enjoyed this fast little read and if you want a nice fun and dirty summer read add this one to your challenge list for this summer
Posted by BOOKS TO CURL UP WITH at 12:18 PM