Today we have a new series for you to check out. THE LOVE HAIGHT case files by Jean Rabe and Donald J Bingle. 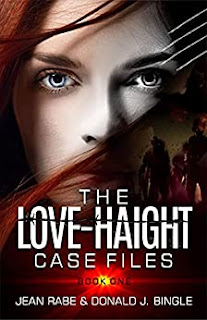 Since the Summer of Love, the Haight-Ashbury district of San Francisco has been known for attracting weird and unconventional souls, but things got even stranger when the monsters moved in.

Magic has returned to the world and with it a host of supernatural creatures—not just vampires and ghosts, but sentient gargoyles, ghouls, sprites, faeries, and more. The frightened citizenry, holier-than-thou bigots, headline-seeking reporters, and harried police refer to them as OTs (Other-Than-Humans), but Thomas Brock and Evelyn Love believe even supernatural creatures have legal rights.

Delve into their case files for a genre-bending mix of mystery, horror, suspense, thrills, courtroom drama, and romance. The city’s OT element is sometimes malevolent, sometimes misunderstood, and often discriminated against. Brock and Love represent them all, dead, undead, or alive—whatever the case, whatever the species.

Thomas Brock and Evelyn Love are attorneys who crusade for the rights of OTs—Other-Than-Humans. Their clients include ghosts, gargoyles, vampires, and things that have not yet been given names. The city’s OT element is sometimes malevolent, sometimes misunderstood, and often discriminated against. Brock and Love represent them, whatever the case, whatever the species. Magic hangs heavy in San Francisco, and danger and intrigue is as thick as the fog around the Golden Gate Bridge

Jean Rabe writes with dogs wrapped around her feet. She wears mismatched clothes and 18-year-old worn-out (but seriously comfortable) sandals to work. When the weather is fine she writes on her back porch. Jean loves summer.

She calls herself a mutt because she writes bits of this and bits of that, not sticking to one genre. She writes mostly mysteries, but also urban fantasy, high fantasy, and sometimes science fiction.

She began getting published when in the sixth grade, studied journalism at Northern Illinois University, then went to work as a news reporter…eventually for Scripps Howard, where she managed their Western Kentucky bureau. Getting itchy feet, she moved to Wisconsin and went to work for TSR, Inc., the then-producers of the Dungeons & Dragons game. She dipped her itchy feet into the fiction pool and wrote Dragonlance novels for several years. Now she’s back in Illinois, surrounded by train tracks that offer music to write by. And there are plenty of dogs in the neighborhood to provide an accompaniment.

She is a recipient of the Faust, the grand master award of the International Association of Media Tie-In Writers, and the Illinois Author Project’s Soon-to-be Famous Award. She’s won three Silver Falchion awards from Killer Nashville, with co-author Donald J. Bingle. Jean has also been on the USA Today’s Bestseller list several times

.She’s written more than forty fantasy, mystery, and adventure novels (including some ghosted projects), more short stories than she’s bothered to count, and edited magazines and anthologies. She is a member of the International Association of Media Tie-In Writers (IAMTW), and the International Thriller Writers (ITW). Her website: www.jeanrabe.com.

When writing, she listens to classical guitar and 60s rock. And at every good opportunity she tosses tennis balls for her cadre of dogs.

He was the Keeper of the World's Largest Kazoo. He made up the science of Neo-Psycho Physics for a time travel roleplaying game. He is a member of The International Thriller Writers. He once successfully limboed under a pole only nineteen inches off the ground. He has written short stories about killer bunnies, civil war soldiers, detectives, Renaissance Faire orcs, giant battling robots, demons, cats, werewolves, time travelers, ghosts, time-traveling ghosts, spies, barbarians, a husband accused of murdering his wife, dogs, horses, gamers, soldiers, Neanderthals, commuters, kender, Victorian adventurers, lawyers, and serial killers (note the serial comma). Of those subjects, he has occasional contact in real life only with dogs, cats, gamers, lawyers, and commuters (unless some of those are, unknown to him, really time travelers, ghosts, demons, serial killers, spies, and/or murder suspects). He prefers gamers to commuters. He prefers dogs to cats. He once received an anonymous lapel pin from the Time Travel Research Association for his contributions to time travel; he promises to get around to making those contributions someday soon. He was once hit by lightning. He was the world's top-ranked tournament player of classic roleplaying games like Dungeons & Dragons for more than fifteen years. His is a member of the Horror Writers Association. He was an Eagle Scout. He is a member of the International Association of Media Tie-In Writers. He used to write movie reviews for Knights of the Dinner Table, a comic book about gamers. He is a retired attorney. He has likely attended Gen Con for more years than you have been alive. He has a fascinating website at www.donaldjbingle.com. He's had eight books and more than sixty short stories published. He can no longer successfully crawl under a pole only nineteen inches off the ground.

a Rafflecopter giveaway
Posted by BOOKS TO CURL UP WITH at 7:13 AM