Good afternoon all , today I have the 24 book in the Underworld series . WHISPERS OF THE MOON by Hp Mallory . 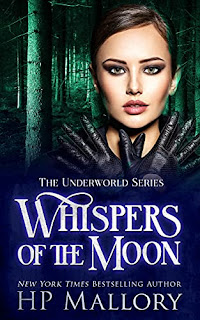 When Emma finds herself face to face with her father, a man she hasn’t seen since she was a girl, she’ll find her emotions all over the place. But when Emma realizes her father isn’t alone and that the Unseelie Fae, Black Annis, is by his side, she realizes things are about to go from bad to worse.

Meanwhile, Rowan is stuck at Kinloch Kirk where Nyx is busily trying to open a portal to Faery so Mathilda can be saved from certain death. Making the process even more difficult is the fact that everyone at Kinloch Kirk is under attack by the Vryloka. But, what Rowan isn’t betting on is the arrival of the two people she never thought she’d see together again.
Bryn and Sinjin return to Kinloch Kirk to find it under attack by the Vryloka. It’s an all-out war between the creatures of the sky and Laucian, Nyx, O’Rourke, and the others—each seeking to keep Rowan safe. And when Sinjin finds himself reunited with his daughter, it will be the most touching of moments.
With Morse by her side, Jolie decides to face the truth in what’s become of Rand. After being told countless horror stories from Bryn, Jolie decides the time has come to find out what’s true and what’s an exaggeration. However, when she finds herself face to face with Rand, she’s confused because it seems as though… he doesn’t see her? But how can that be possible?
MY REVIEW
It is time that Emma finds herself standing in front of her father . The man who use to love her and her mom with all his heart . There is something really wrong with him . He has gone dark , he isn't the Rand that everyone loves . Then things go from bad to worse when the Black Annis is along with him for the ride .  Bryn and Sinjin are back and getting ready to fight . Jolie is getting ready to face the man who doesn't remember her and she wants to know why . Will they survive and will they bring the underworld back together .
Omg what can I say this is the final book in the series , it brings all the characters together and finally over throw the Dark Mage and the unseelie court .  Jolie is back and stronger then ever , she is ready to fight till the death to find out what is wrong with her husband . Bryn and Sinjin are hotter then ever fighting and and making love . They belong together and so glad that they are back . Emma and Rowan finally find the power that is in them to help defeat the darkness that is coming . We really get to see these characters grow and finally get to stop the darkness . i love these characters and I really hope that we get to see Emma and Rowen as adults and what they will discover .
This is such a fun read , I have loved these characters from the very first book . They are so much fun to read and you will laugh out loud at some of the antics they get up to . The author created such an unique universe that is ever growing . I read this book in an evening I didn't want it to end cause I knew this was the last book in the series . This is such a fun series and its would be a great series to read for halloween, so check them out . You will meet some fun characters .
Posted by BOOKS TO CURL UP WITH at 3:04 PM