MADE IT TO THURSDAY

Good morning my lovelies , hope your Thursday is going well and you are getting ready for the weekend . Today I have the second book in the Valkyrie Allegiance series. VALKYRIE REBELLION  by A.J Flowers . 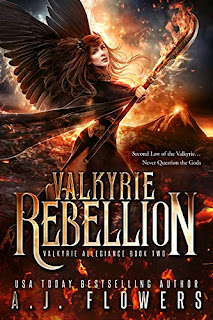 Second Law of the Valkyrie... Don't Question the Gods.

Whelp, I broke another one.
Questioning the gods is the least of my problems. Freya is about to flip her lid. Odin wants my man in his super army.
And then there's Heimdall, a gangster goddess with a gold grill for teeth who runs this swanky New York Restaurant (which also happens to be the Bifrost).
We've escaped to New York, but evil seems to have followed us here. People are mysteriously dying and the echoes of Ragnarok haunt my dreams. The closer I get to Will and Tyler, the more I realize I can't ignore my heart. I need to reclaim my memories and figure out who my heart belongs to... before I give it to the wrong one.
MY REVIEW
Well what do you do when you are breaking rules left right and center . Val has broken the second law of the Valkyrie , as she questions the Gods . Freya is ready well to do whatever it takes and Odin wants Will to become a Valiant in his army . The evil that is wanting them has followed them to New York where they meet the Heimdall , who is a goddess with a gangster attitude who just happens to run Bifrost . As Val tries to reclaim her memories , Will and Tyler get closer and closer to her but who does her heart belong to.
Val and the guys are back and I think better then ever . Val is much more of a fighter in this one . She is fighting to remember her memories and fighting to keep Will with her . She is even fighting her feelings for two men in her life .  She is one tough cookie and won't let anyone get in the way even her mother Freya . Will and Tyler we can put them together as warriors but also guys that have her heart . They will protect her but they are also men who get jealous and want her for themselves . We also get to meet a new character who to me is so much fun to read . Heimdall is a goddess who well is crazy and she shows it well . She goes gangster and keeps everyone on their toes .They are becoming more and more complex and I am really liking them more .
Being book 2 in the series I was wondering how the author was going to handle the characters . Well the author took us on an epic roller coaster ride . There is a lot more action and loads more angst and yes there is romance in the story. The characters are getting more and more complex . I started this book and got sucked into the story right away . I really started to care for them and really wanted them to be happy . This was a faster paced book with a lot more action . So if you want a good series and a book that will have you hooked from the first chapter . So check it out .
Posted by BOOKS TO CURL UP WITH at 7:44 AM