Good morning everyone, hope your weekend was great . Here was cold and dreary a great weekend to sit down and read all weekend .  LOVE SERVED HOT (Love on the Menu book one ) by Mellanie Szereto 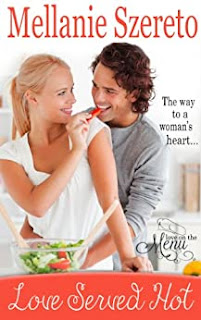 As acting director of her uncle’s retirement village, Lilith Montgomery must hire a chef for the new restaurant. She’s interviewed several candidates, but instantly decides on the sexy Irishman whose culinary creations give her foodgasms. Her rotten luck with relationships makes her determined to resist her attraction to him, even if it means sneaking into the kitchen at night for a taste of his delectable entrées.

Flynn Hastings is finally getting his life back on track after a year of anger and guilt over his sister’s death. He’s returned home to be near his family and has found the perfect job—with one small problem. His boss makes him want to cook in more than the kitchen. Putting aside his hard and fast rule about mixing business with pleasure, he sets his sights on Lilith, hoping their budding friendship turns out to be more than a flash in the pan.
MY REVIEW
Lilith Montgomery is over worked and trying to run her Uncle's  retirement village . She has to hire a chef for the new restaurant that the village is opening . In walks the sexiest chef ,with his sexy Irish lit and food that will give you foodgasms. He is a hard man to miss and relationships are not on the menu for Lilith but after he basically runs over her after their first meeting . There is a bed and a thong involved . Flynn has to think about his rule about not mixing relationships and work .Will Lilith be the one to break that rule and will their friendship become more then a flash in the pan .
Ok lets talk about these two . Flynn well i would let him cook for me anytime he can . He is so sexy and a man that can cook is a ok for me . But he is also trying to come to terms with the death of his sister a year ago. He is a flirt and also a really good guy . He loves his job and is excellent at it . He will be there for you if you ever need anything . Lilith well I just want to give her a hug . She is sweet and kind but also carrying around so much guilt about the past. She can't seem to find the right guy . She has been hurt so many times and just doesn't want to have a relationship . She takes her job seriously and takes what happens to the seniors in her care seriously . She is scared of loosing everything and everyone that she loves . The best characters I think are the older people in the retirement village . From Alice the pink haired sex loving woman who is like a grandma to Lilith . To France the sex therapist who hands out condoms to everyone . They are such a hoot  you will laugh so hard with them . They are all wonderful characters .
This is one of those books that you will start to read and keep reading . The author does take us on an emotional roller coaster at times through out this book . I was laughing so hard through some parts and there is some emotional parts that had me bawling my eyes out . There is one scene that deals with an Alzheimer's . It really hit home in some areas. This is a friends to lovers book and it is a slow burn . When they do get together it gets so hot fast . I did  find that it did kind of dragged at the beginning but the pace did pick up and I enjoyed the story very much . So if you want a fun read check it out .
Posted by BOOKS TO CURL UP WITH at 8:18 AM