Good morning all  and Happy Devils night . Today  I have for you the third book in the Descendants  of Isis series . NAME OF RA  by Kelsey Ketch. 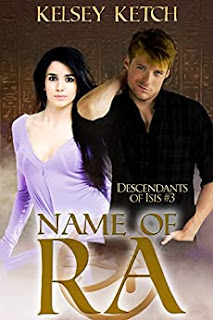 After being on the run from a psychotic cult for a week, Natara “Natti” Stone has finally come to realize she and Seth are the only two people standing between the Sons of Set and the secret name of Ra. Holding a part of the key that unlocks Ra’s power, they relocate to a more isolated location in the California mountains. While laying low, Natti becomes even more determined to understand her mother’s bloodline and her blessing from the goddess, Isis. But when she starts seeing the truth behind her destiny, she begins to doubt her role in the events that are about to unfold.
Then the unthinkable happens . . .
All Seth O’Keefe wanted was to get Natti as far away from his father and the Sons of Set as possible. Unfortunately, after hearing of Natti’s destiny from Isis’s own lips, he realizes they have bigger issues to worry about. Especially when one stupid slip up leads the god of chaos himself straight to their doorstep. Now Natti is the god’s prisoner, and Set holds the key to unlocking the location of the secret name of Ra. Can Seth save Natti from her own destiny and thwart the demented god’s rise to power?
MY REVIEW
Nattie and Seth are still on the run from his father and trying to find out what the future holds . When Seth finds out Natti's destiny there is a bigger problem then just staying away from his dad . After the God of Chaos comes alive and inhabits his fathers body . It is a race against time to free Natti from the God's prison . Seth is the only one that can save her and holds the key to unlocking the location of the secret name of Ra . Can Natti and Seth survive the demon and find the secret name of Ra or will the demon God stop them .
Natti and Seth are back and fighting harder then ever . Natti is working hard to come into her powers as Seth is trying to protect her and figure out the riddles of Ra.  Natti is strong and stubborn but at times she really does show how young she is . She gets frustrated a lot of the time and sometimes just feels like she is lost in her own mind. Seth is overprotective and he is also carrying a lot of stress on his shoulders . He is also a sweet , fun , sexy and has a mischievous smile that will melt a girls heart . They make a cute couple and they have a bond that is very hard to break .
This is the last book in the series and wow what a book it is . It is packed full of action and there is teenage angst and some romance to go along with it . The characters are well written and have gotten complex . The author does take us on a very emotional rollercoaster ride . We get to see them fall in love and fight the evil that threatens to take over the world . The author did a great job entwining the mythology with a love story . If you like Egyptian mythology this is a good series for you .  This would be a great series for the older teens on your list and for you also . So if you want a great series for your winter reading list check them out
Posted by BOOKS TO CURL UP WITH at 7:46 AM