WOOHOO MADE IT TO FRIDAY

Good morning my lovelies we made it to Friday , time for a good book and and a glass of wine . Today I have book 2 in the Descendants of  Isis series . SON OF SET  by Kelsey Ketch 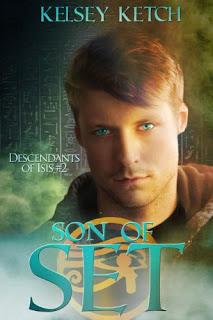 Seth O’Keefe has broken the laws of his god. He never thought he would sacrifice his own future to protect a Daughter of Isis. But when the Sons of Set discovered Natti is the Secret Keeper, he had no choice. Now, Seth and Natti are on the run from his father, who wants nothing more than to see Seth dead. With no allies, Seth turns to the Daughters of Isis for help, hoping they would protect Natti. But when they meet the Daughters, he discovers a secret that puts both their lives in more danger. Low on options, Seth sees only one possibility for survival. He must help Natti solve an ancient puzzle and find the secret name of Ra.
Natara “Natti” Stone is having a hard time swallowing the truth. She can’t believe what she has learned in the past twenty-four hours: Seth is a Son of Set blessed with charm; she is a Daughter of Isis blessed with a sliver of Ma ‘at; the locket her grandmother gave her holds an ancient Egyptian secret linking to Osiris and Isis. That along with being tortured and brutalized by the Sons of Set, she can hardly hold herself together. Thank God for Seth’s touch! That warm, tingling sensation that drowns it all out. Yet her heart struggles to stay focused. She must quickly embrace her destiny before the secret name of Ra falls into the wrong hands.
MY REVIEW
Natti an Seth are on the run from his father who wants to sacrifice her and kill his son . When Seth finds out that Natti is a secret keeper for the Daughters of Isis he needs to keep her safe. When the find the Daughters Seth finds a secret that could destroy his father and maybe destroy him in the process. Natti is on a mission but Seth is the rock that she leans on to help her in finding the name of Ra .But with no real help and his father on their tale will they be able to keep each other safe and find the secret name of Ra before it is too late .
Natti and Seth are back and wow they are in it big time . The book starts off right where book one leaves off . Natti and Seth are on the run trying to get away from his dad . Natti is ready for a fight but she still doesn't really know about her past and the power she possesses . She is really a fighter with a bit of naivety mixed in .She really wants to solve the mystery but Seth wants to protect her . He actually really grew in this book , he realized there is a secret about him that they find out about , it makes him really turn around and try and be the good guy . He really becomes a bonafide good guy . Sean is truly evil and is on the heels of Natti and Seth . Sean has basically dived off the deep end and wants them both dead .
This is one of those books that you need to curl up and block out some time to read . This book will have you sucked in and you will loose time while you are reading . There is so much action that is going on, from the first page to the last . There are moments that you want to slap both the main characters in the head cause they are doing something stupid . Then you will want to hug them . We do learn a lot of back story in this book also . I truly liked this story and the characters but i did find it did kind of lag every now and then and slowed the story down a bit .Over all I truly liked this story and can't wait for book three . So if you want a good series that would be great for older teens and us check it out . You will not be disappointed
Posted by BOOKS TO CURL UP WITH at 7:54 AM