Good morning peeps , it is day three of reader round up  and today I have a fun fast read for you by Savannah Verte .  ELEMENTAL PROTECTOR ( A FEDERAL PARANORMAL UN MAKING WAVES SERIES ) 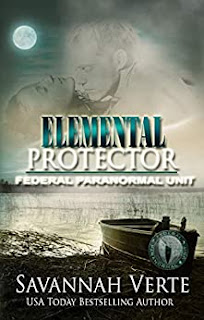 When Elemental Andrej Siminof reaches out to an old friend to uncover the meaning behind the colors he can now see, he gets far more than advice, he becomes an agent with the FPU hot on a confusing case that brings him back into the world of the Making Waves family he only recently encountered. Charged with finding out who is trying to poison the waterway, he must walk a fine line between being an agent, and following the path to his destiny newly revealed.

An eclectic witch, Marine Botanist Taylen Scott can’t shake the sense that she’s being watched. She is, but not for the reasons she supposes. The arrival of Federal Agents in her lab, put her further on edge as she tries to unravel how and why there’s marijuana growing in the Back Bay Channel. She’s determined to get to the bottom of the mystery, even if it means risking everything.
An inferno of fire from an explosion takes Andrej back to his black and white existence, forcing him to choose once and for all who he will be…agent, Elemental, hero, or casualty. The fate of the witch he’s come to love hangs in the balance, as does his one shot at the future.
Can they have it all, or will he have to give it all up to give her a fighting chance?
MY REVIEW
When agent Andrej Siminof has to reach out to an old friend to figure out why he is seeing spots ,colours . He gets more then he bargained for when he becomes an agent for the FPU. Where he is thrown into the middle of a confusing case involving the making waves family . When he meets Taylen Scott is a marine biologist who is also a eclectic Witch. They are instantly as they figure out what is going on . Will they be able to figure out what is going on in the channel and will they be able to live without each other .
Welcome to the world of the FPU where they investigate the paranormal . Taylen is an eclectic witch and a marine biologist and she is very serious and feisty . She is trying to figure out what is going on in the water . When push comes to shove she will protect anyone that is dear to her .  Andrej is well he is your typical alpha who is sexy and deep down he has a heart of gold . When push comes to shove he will do almost anything to protect the ones he loves . Even if that means he looses part of himself in the process.  These characters are well written and complex you will love them from the start .
This is one of those reads that is a fast read . The author throws us into the action by chapter two .  Andrej and Taylen will have you falling in love with them, they are complex and well written .  The story is fun to read and you can have it read in a couple of hours .  The author does take us on a fun ride that will have you on the edge of your seat through out . The story has a mixture of romance and mystery with a little bit of a stalker vibe going on . I truly liked this story and can't wait to read more books in this series . So if you want a fun read check it out .
Posted by BOOKS TO CURL UP WITH at 8:37 AM