Good morning peeps today I have another book from two of my favorite authors Hp Mallory and J.R Rain.. This is the third book in the Lucy Westenra series . BEAUTY AND THE BARBAROUS BARBER 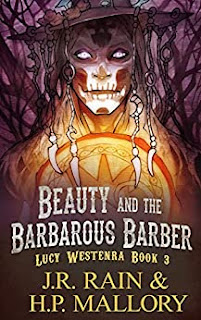 When I find Henry, aka Dr. Jekyll, covered in blood and barely coherent, I’m a nervous mess.

Of further interest is the fact that Henry’s counterpart, Mr. Hyde, has been ripped from him.

After rushing Henry to the hospital and with no information about what happened to him, I get the only person involved who can help: Holmes and Watson.

After learning there has been a chain of murders in Sacramento, I also learned one of the most feared villains is loose: Sweeney Todd, the Barber of Fleet Street.

And he’s got a special knife that can separate souls from bodies.

It quickly becomes a rush to outthink and outsmart Sweeney Todd as we try to understand what he wants, why he’s here, and why...he attacked Dr. Jekyll, ripping away from him, Mr. Hyde.

And, as if that weren’t enough to deal with, I’m also coming face to face with none other than the man who created me...Dracula.

MY REVIEW
When Lucy finds Henry almost dead in his apartment she rushes him to the hospital where that sets off a chain of events sent Lucy on a challenge to find his other  half and bring them back together. While she is trying to figure to out the person who is the cause of a chain of murders and finds out that one of the most hated villain  of all is out Sweeney Todd . To make matters worse she runs into the man she didn't ever want to meet again her maker Dracula yes I said Dracula . What is she going to do and will they survive .
There are some great fictional characters in this series and now we add Sweeney Todd to the mix . Lucy is the main character and man she is tough and sassy but she is honestly getting tired of what she has to do . Henry is well he isn't the whole man he once was missing his other half . Sweeney Todd well he has so much going on and murdering is all part of it . There are so many well written characters in this book you will fall in love with all of them . All of them very complex
This story is the last book in the series and the authors take us on a rollercoaster ride that has us on the edge of our seats . The characters are well written and you will love to hate them . This is a book you can read in a weekend and then sit back and go wow what did I read and wow I really liked it . I truly love these two authors and their style of writing . I am sad that the series is ending but it went out on a big note .  So if you want a really good series packed full of some awesome fictional characters . Check it out .
Posted by BOOKS TO CURL UP WITH at 8:20 AM