GOOD DAY AND WELCOME TO DAY 6

Good afternoon everyone I am on day 6 of reader round up . I will say that the books are great and love reading them . Today I have book five in the Division Zone series . HARBINGER  by Matthew S Cox. 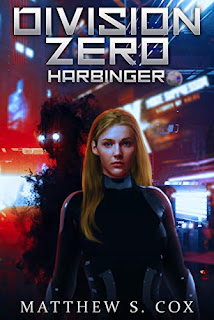 At long last, life is somewhere approaching happy. Her adopted son has put his past behind him and she’s even finally trusted herself enough to start a romantic relationship. Best of all, no corporations or demonic creatures have tried to kill her in a whole month.
Dead gang members start turning up, victims of murders with ritualistic overtones. Division 1 files them away as low priority due to their policy of letting the street trash clean itself up. However, when additional killings occur with obvious supernatural causes, Kirsten officially takes jurisdiction.
In the midst of her investigation, a Harbinger attaches itself to her. The chilling ramifications of that become clear once she discovers the area’s most feared gang has developed a working relationship with the Abyss. If she doesn’t act fast, all of West City will become a hellscape.
MY REVIEW
This isn't the first time that Lieutenant Kristen Wren has encountered Harbingers but they usually don't follow her home . Things at home are going great her adopted son is finally adjusting to his new life . Now with dead gang members are ending up dying all over town and there are ritualistic in meaning . Kristen take overs the investigation and with the help of her ghost partner Dorian she is working hard to get the bad guys even if it means taking down one of the most feared gangs in the district .
There are so many characters in this books . Kristen is such a wonderful woman .. She is feisty and hardworking and also a psychic who can see the dead . She is in the best relationship and her son Evan is sweet and sometimes he comes off immature but not really being immature . He wants to be friends with everyone and loves taking care of those friends .There are so many characters that come and go through out the book and keep Kristen on her toes . All the characters are very well written and complex.
This is one of those books that combines science fiction with a dash of drama and mystery . The author has a great grasp of the genre and paints a very vivid landscape for these characters to live and work in . The characters are well written and complex and you will love them . I truly enjoyed this book and loved the characters and the story is complex . If you want a good read for an evening check it out . It is part of a series but you can read it as a stand alone. So check it out .
Posted by BOOKS TO CURL UP WITH at 1:41 PM