WELCOME BACK TO WEDNESDAY

Good afternoon peeps I am back and I have the 9th book in the Happily Never After series . Lets look at BELLE  by Hp Mallory 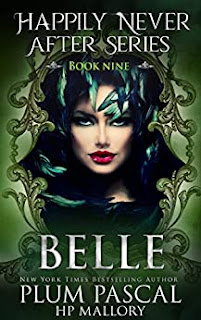 After Kronos takes control of Delerood, Belle and her soldiers are forced to retreat.
Realizing the blow is a big one, Belle also realizes the only way back into Delerood and through Kronos’ time-loop, which keeps outsiders out, is by returning to Castle Chimera, where she’ll need to appeal to the three monsters living there.
But appealing to these three monsters, known as Alder, Horatius, and Beacon, won’t be an easy feat because, sixteen years earlier, Belle cursed them to their vile shapes. Not only did she curse them to resemble monsters, but she also cursed them to remain within the castle’s boundaries. To say they hate her is probably an understatement.
Yet, Belle still needs them because she believes they’re the only way to defeat Kronos. Why? Because sixteen years ago, they served under Kronos, hence why she cursed them in the first place.
While securing their help will be a feat, so is trying to convince herself she’s not moved by Alder’s rough touch, Beacon’s bitterness, or Horatius’ secret…
MY REVIEW
Belle is forced to retreat after Kronos takes control of her town . She is determined to get back and defeat Kronos but she has to go back and fix what she has done sixteen years earlier and face the three men she turned into monsters and ask or I should plead for them to not kill her and help her with Kronos . Things are more then what they seem and when they are together they are a force to be reckoned with . Will they be able fight their feelings to fight their enemy . They will be together or will the lies and the history keep them apart .
Belle is one of those characters that is strong but also scared of what can happen if she can't stop Kronos. She is feisty and actually very loving. Aiden' is well he is the alpha and he is storing up a lot of anger up for Belle . He is brooding and an over thinker . Beacon is hiding a bitterness for Belle but he is also sensitive and is a great soldier . Horatius is hiding a secret that could get them into the town and through the time loop. He is a sweet heart that is ready at the drop of a hat to fight the enemy.  They are such fun characters that are well written anc complex.
This is book nine in the series and the author keeps it a fun read . This is a great twist on the Beauty and the Beast story , with Belle being a sorceress and the beast are actually three men . The author has created such a grand world where there is good and the bad that is coming to a big stand off for the world of Neverland .  I read this book in a evening once I started I couldn't put it down until I found out what was going to happen.  Each story builds on the one before to add up to the final battle .  I was on the edge of me seat through out and there are some sexy times that go on through out . So if you want a fun series check it out .
Posted by BOOKS TO CURL UP WITH at 3:03 PM