Welcome to Monday everyone, hope you are well caffeinated and enjoying this August day . Today we have the 4th book in THE LOST CITY  series . BLAZE'S INFERNO  by D.L Colon . 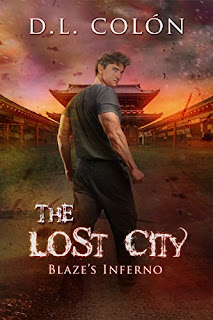 Rick Blaze thinks he’s the fire user, but all that is going to change. He can hear the calls, but doesn’t know where they are coming from or who it is calling him. As the call gets stronger each day that pass and he’s forced to leave his Guild behind and search for the owner of the mysterious voice that continuously calls him.
Kenna Flames, Goddess of Fire and owner of the Holy Flames, is forced to step out and defend the Temple of her ancestors as the Saviors are approaching. They want the Holy Flame. She is forced to use her powers to compel all the fire users to defend her, but she realizes too late that all fire users are heading her way for another reason entirely; the Holy Flames are calling them. What may be her last chance may also be her doom.
When Blaze arrives at the Temple he is met by a lot of fire users and they are trying to touch a blue flame. He also sees the most beautiful woman he has ever laid his eyes on.
As he looks upon the flame he hears a voice in his head saying; You have come, chosen one. Will you be strong enough to survive my touch or just absolve like all the ones before you?
Will Blaze know where the voices come from and will Kenna be able to protect her temple from the Saviors?
Will Rick help her or will he doom us all?

MY REVIEW
When Blaze hears a voice calling to him , he is forced to leave his Guild and look for the woman behind the voice . When he meets Kenna, the owner of Holy Flames , there are sparks and when he sees the blue flame the voice that has been calling to him has a question to ask him . Will Blaze and Kenna save the temple and stop the Saviors from coming . Or will Rick doom them all .

You will know most of the characters if you have read the other books . They have really become well written and each book they become more complex . The two main characters Blaze and Kenna are well written . Blaze is a little arrogant as he meets up with Kenna . You either want to slap him or hug him . There is a secret that he is carrying around with him that makes him relatable .  Kenna is tough as all get go , she is ready to defend what is hers .  She is a cool character you will like her. Noryad and Coral are back with their own set of problems and what they should do during battle,

I have been waiting for this book for a long time . When I finally got it I had to dive in right away . The author takes us on an adventure that had me turning pages . The characters are well written and you will like them . There are some twists and turns that will have you going what the heck . The only thing that I found with this book is the chapters are shorter and I am thinking that the author could of flushed it out just a little bit more . Over all I really enjoyed this book and I am so glad the author finished it .  So if you want a good book for this fall check out the series