Wow I can't believe it is that last week in August where did the summer go . I hope everyone had some great books that they got read this summer . To start off our Fall reading challenge I have a new author to introduce you to . O.E Tearmann . THE HANDS WE'RE GIVEN ( Aces high. Jokers wild book one ) 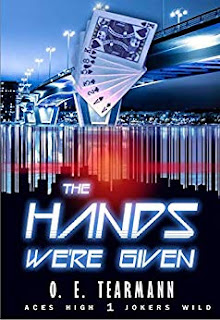 Aidan Headly never wanted to be the man giving orders. That's fine with the Democratic State Force base he's been assigned to command: they don't like to take orders. Nicknamed the Wildcards, they used to be the most effective base against the seven Corporations owning the former United States in a war that has lasted over half a century. Now the Wildcards are known for creative insubordination, chaos, and commanders begging to be reassigned.
Aidan is their last chance. If he can pull off his assignment as Commander and yank his ragtag crew of dreamers and fighters together, maybe they can get back to doing what they came to do: fighting for a country worth living in.

Life's a bitch. She deals off the bottom of the deck. But you play the hands you're given.

MY REVIEW
The Wildcards are the unit that you go to when you need things done and have no worries on how it get done. Aiden Headly is the one who is in command of this ragtag crew , he really doesn't want to be the commander . Can he get his team to come together and do the job that needs to be done so they can fight for a country that is worth living in .

The characters in this book are well written and very complex .  Each member of the team has a mind set that is beneficial for the team.  There is more to the characters then just the skills they have . Each member has a well not a secret but there is more to them then meets the eye. Aiden is a trans gender and Kevin is gay and grew up differently then the rest of the team . I truly loved how these characters come together and become the team that they are suppose to be .

The ideals of this dystopian tale are so real . The idea of having the perfect world and pushing those who don't come up to the standards out to the outskirts . This story has it all . We have those who want to fight for the rights for all and those who want those that are different destroyed . I like that the author used LGBT characters and shone a light on those that are different . They are such good characters I was cheering for them all the way through their missions . The book has some great twists and turns that will keep you reading.  This isn't a love story but the author does mix a little bit of romance in . There were a few parts in the book that i felt that were slow but over all I truly enjoyed this book and was glad when I found it . So if you want a different story set in a futuristic dystopia book check it out and add it to your fall reading list