We have another release today from one of my favourite authors . THE AWAKENING a Vampire romance ( Bryn and Sinjin book 6) by H.P Mallory 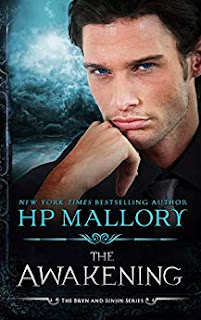 While returning from a scouting mission to attempt to locate Luce’s camp, Bryn stumbles on a wolf-girl strapped to a rack and left for dead.

Once rescued, the girl, Dayna, tells Bryn and company all about the newest flavor of Luce’s evil and, most specifically, what Luce plans to do to Bryn, if he ever takes her as prisoner again…

Upon returning to the queen and Kinloch Kirk, a new arrival starts heating up the scene and making waves. Audrey Chevalier, Dureau’s beautiful French sister, seems to be overly interested in Master Vampire, Sinjin Sinclair.

And unless Bryn’s mistaken, Sinjin appears to return Audrey’s affections.

Will this budding new romance push Bryn into the arms of Dureau? Or will it make her second guess her decision to avoid a romantic attachment with Sinjin?

Meanwhile, Jolie continues to gain allies as it appears the Underworld is soon to go to battle with Luce’s forces yet again.

That is, until Dureau informs Bryn about the true nature of her ancestry, information which could absolutely change the tide of the war for all involved.

And, prepare yourself, for an ending to this book that will leave you speechless…

The Awakening is book six in the Bryn and Sinjin vampire romance series.

MY REVIEW
Bryn and Sinjin are back and in hot water yet again . After coming back from a scouting mission to find Luce's camp . They rescue a she wolf that has been left for dead strapped to a rack . After rescuing the young wolf they hear all about what Luce is going to do to Bryn if he ever gets his hands on her again. But thats the least of their worries once back at the castle Sinjin seems to be taken with Dureau's beautiful sister  Audrey and she is overly interested in our vampire . Which pushes Bryn into the arms of Dureau who has a secret of his own .  With Jolie gaining allies in the Underworld to fight Luce they are ready to go to war . Will they survive and will Bryn and Sinjin be able to work their way back to each other.
I absolutely adore the characters in this series . Bryn is at war with herself and her feeling for the two men in her life . She is feisty and strong and will kick your butt just as soon as look at you . You also see a vulnerable side to her that make you fall for her even more. Sinjin is well he is suave and debonair but he is also conflicted in this book . He knows he wants Bryn but when he is tempted well you know what happens . I absolutely adore Sinjin  Jolie and the rest of the gang is also back and you will love them  all .

This book had me from the first chapter . I simply adore the characters and they are so well written and complex . The author takes us on quite an adventure in this book . You will get emotionally invested in them . I have loved Sinjin since i met him in the very first book and he just keeps getting better and better . I am going to warn you though there is a big cliff hanger at the end of this book . Its a holy moley what the heck kind of cliff hanger that will actually have you kind of cheering .  So if you want a book that has a lot of romance intrigue and magic check out the series . You will love them all .