Good morning all , today I have an epic and yes I mean epic fantasy book for you .  Matthew Cox has a new book out called OF MYTH AND SHADOW 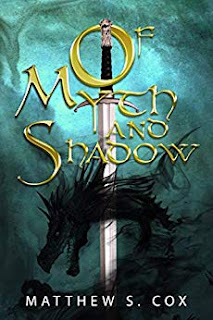 Aegaan is a vast and righteous kingdom, yet darkness gathers in the distant corners of the realm. Elven raids on small towns have inflamed racial tensions with humans, pushing distrust to hatred and the brink of war.

Anrael wanders the woods alone until a chance meeting tempts him to set aside his contempt for those who scorn his half-elven blood.

When Kylie, a naive elf terrified of humans, is thrust among them against her will, she begins to question her mother’s tales of dread.

Having lost everything dear to him, the bandit king Jhelan lives only to seek challenge in battle… until he finds himself willing to die protecting that which he hates the most.

The diabolical mystique of the dark elves cloaks L’an Thal’Sara in protection, but the cruelest lie she tells is to herself.

Thaelwyn, a virtuous knight, sets out to discover the source of the Elves’ aggression, but faces a much greater test within his mind.

Beneath the chaos, minions of the Destroyer search for their promised leader, a child possessing power beyond their years. If the innocent falls to darkness, a kingdom rife with hatred will surely crumble.

MY REVIEW
This is an epic fantasy that is set in Aegaan a righteous kingdom that is being plagued by elven raids on the small towns that are inflaming the racial tensions between humand and elves . Pushing them closer and closer to the brink of all out war .
There is a varied cast of characters in this book . They are all part of the bigger plan that could have minions of the the Destroyer take over the world . Each character is well written and complex . Anrael is a half elf that has been through so much , his parents and towns hatred , he wanders around until he has a chance meeting that could change his life . He is a broken man that is hiding so much pain . I truly liked him , he is to me so broken and just wants to be loved .
Another character i absolutely loved is L'an Thai'Sara , she is a character that you want to wrap up in a blanket and say everything will be ok and its ok to love. She is a dark elf that is considered an assassin and they treat humans like slaves . She has some inner turmoil . She wants to be away from Jhelen but she can't seem to leave him . There is a strong sense of love but hatred going on between them . These are just two of the many characters that will have you reading all night long. . Each character will take you on a journey that will have you on the edge of your seat and cheer for them .
This is one of those books that when you start reading you will not want to put it down . I will tell you right now it is a big book but it will keep you interested all the way through. The author takes us on an epic adventure with so many twists and turns . The story is told from different characters , they switch thorugh out the story. You will never get bored of one character cause we get to switch it up . You will not be bored . The author has a great was of describing even the tiniest detail . I really liked the story and the characters , I hope that you will love them also . The ending is epic and the outcome is the best . So if you want an Epic book for your winter reading list . This is the book for you .
Posted by BOOKS TO CURL UP WITH at 8:43 AM