Well its Wednesday and my migraine is finally gone . Today  I have a new book by a new author to me . THE GOOD, THE DEAD and the Lawless THE HELL THAT FOLLOWS  by Angelique Archer . 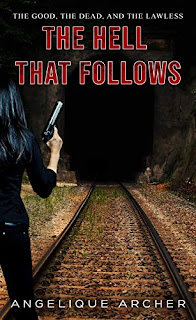 Now searching for her missing sister, twenty-five year-old Haven Janero and her family are barely scraping by in an old farmhouse on the outskirts of town, trying to fend off attacks from the infected, scavenge for food and supplies, and steer clear of dangerous marauders who pilfer and pillage, eager to take advantage of the frenzied turmoil.

When her group finds salvation in the form of redheaded Marine Gunnery Sergeant, Kennedy Mitchell, and her mysterious and coveted "camp," they are forced to deal with the new rules of a post-apocalyptic world, and as the country unravels around them, fight their way through the hell that follows.

This book is part two in a trilogy.

MY REVIEW
In book two Haven is trying to find her sister . Haven and her family are barely surviving . Scraping by in an old farm house , trying to scavenge for food and trying to stay one step ahead of the infected and the marauders that are trying to take everything they have . Until the day they found some safety and hope in the form of marine sergeant Kennedy Mitchell and her band of battle ready men and their secret camp . Where they are forced to figure out the rules of this new world and the survivors that are living in it .

There are many well written characters in this story. Kennedy the marine sergeant . Who has been through so much . She saw her family basically destroyed by the infected . She is tough as nails but also there is a softer side to her a side that really cares for the people in her tribe and the ones she helps saves .  Haven is a little bit more of a free spirit and wants to keep her family together. She is strong but also so vulnerable at the same time . She is mourning at the same time . They are both kick butt characters and the guys that surround them are also kick butt and will be there for each other . I really liked the characters in this book and you will love them

I got this book and snuggled down to start reading , I honestly think I didn't moved until I was almost done. The book sucked me in and had me on the edge of my seat most of the way through .  The characters are well written and you will love them and hate them . The book is more then a zombie book , you have characters that have lost more then just family. They have lost so much more that they are trying to get back . There is their share of zombies to fight but also there are more threatening things to fight .The author writes a very descriptive and vivid story that also has so many twists and turns . You will cheer on the characters , even the bad ones . I must say I can't wait to find out what happens in the final book . I think you should add this book to your fall reading list . Especially towards this Halloween time . You will enjoy this book and all its twists and turns . Be prepared to read all night .
Posted by BOOKS TO CURL UP WITH at 9:12 AM