Its already Wednesday, hoping everyone is having a great week . Today I have the last book in the Gnomeling series . GNOMELING TREKS THE MIDNIGHT FOREST  by Dawn M Paul 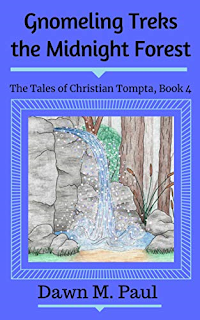 Oh thistle-stickers! Christian Tompta, the gnomeling, has conquered his fear time and again-even going so far as to save the gnome village of Joddeburg from certain catastrophe. The Gnome Council has granted him the position of gnome guardian, and now all he has left to do is retrieve his mystical shoes and conical from the Cobbler in the Midnight Forest. It should be an easy journey, right? Join Christian as he eagerly awaits his final destination in this exciting conclusion to "The Tales of Christian Tompta!"

MY REVIEW
Well Christian has done it , he has saved the village of Joddeburg and he has finally earned his hat and shoes . All he has to do is head to the cobbler in the Midnight Forest . You think that would be easy but this is Christian we are talking about . He and his father head out adventure awaits .
Christian has grown up so much through out this series . He is finally ready to watch over a human . He shows great strength and smarts when his dad is hurt . I was truly impressed on how he grew up and took charge .
The last book in the series will have your kids cheering  Christian on . The author still puts Christian through some perils but you see him get through them with ease . I am going to get this series for my niece it is such a great way to show them even when you are scared you can conquer it and find a way through it . This should be on your kids reading list for this fall
Posted by BOOKS TO CURL UP WITH at 8:08 AM