It is Monday and it is release week for Andy Peloquin and his new book SHIELDS IN SHADOW, the first book in the Silent Champions series 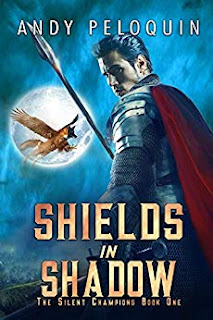 As the son of a famous general, Aravon is proud to captain his own company against his people's enemy. But the experienced veteran’s march toward glory dissolves into pain as ruthless barbarians massacre every last one of his soldiers. Burning for vengeance, he leaps at the chance to spearhead a specially-trained company and pay back his tragic defeat with blood.
Desperate to not repeat his tragic past, Aravon trains his new warriors relentlessly. But the captain fears that all the tactical drills in the world may not matter when they’re forced to defend a helpless village against overwhelming odds. As his quick raids sow chaos amongst the enemy, the bloodthirsty savages threaten to make Aravon's nightmarish history repeat itself…
Can the captain take command of his fighting spirit before the kingdom falls to barbarous invaders?
Shields in Shadow is the first book in the action-packed Silent Champions military fantasy series. If you like square-jawed heroes, well-oiled military action, and epic world-building, then you’ll love Andy Peloquin’s gripping novel.

Buy Shields in Shadow to stand at the frontlines of a hero’s revenge today!

Aravon a well respected Captain with his own company when they are attacked by some savages the company must not repeat the hellish histroy that is bound to repeat itself .  Can they take over come the savages and can Aravon take command of his fighting spirit before the savages take over the kingdom.

I must say the characters in this book are very well written and complex . Aravon is a strong man who has some flaws that make him such a good character. He is strong and commanding in a good way . He is the lone survivor of a massacre that has shaped into the man he is .  The people in his company  Colburn has lived a life of hardship as a half breed . He is one of a kind. I liked him .  Then there is Belthar , he is a gentle giant that is so sweet but also so much in pain . You can feel it when he talks he is very closed off and quiet. You will want to hug him and keep him safe . Skathi is the only woman archer and she is strong and can fight with the best of them . You really don't want to mess with her, she is also hiding some pain from her past . I loved her character and she really does put the boys in their place .  Noll is snarky but deep inside he has a heart of gold and there is a goodness deep down that you will love when he brings it out . Zaharis is a secret keeper , mute but a great alchemist and he is also on the hunt for something that might not even exsist . Last but not least is Ranvladr a sweet man and a healer who has the heart of the biggest warrior but honestly just really wants peace . I loved all these characters and the way they interact with each other and will lay their lives on the line for each other when push comes to shove .

Ok i am going to tell you right up front this is a long book but you won't notice cause the author sucks you in by chapter two .  The author weaves such a fine story with great characters and such a great story line  The battel scenes are well written and the twists and turns will keep you on the edge of your seat. The story weaves itself around you and puts you in the middle of the action. You will be cheering Aravon and the company on through out the story . You will also want to wrap them up in blankets and tell them that everything will be ok . So if you want a complex story with characters that will have you cheering them on this is the book for you . So if you want a great stroy that will have you reading all night long this is the book for you .
Posted by BOOKS TO CURL UP WITH at 8:17 AM