Good afternoon all , we made it to Friday woooohoooooo.  Today I have a new release for you by Rachel Rawlings . Book 2 in the A Touch of Ink series . BETTER INK TWICE 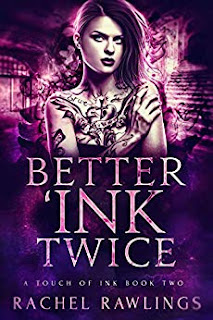 Adeline Severance's magical, double life landed her at the top of the Magistrate's most wanted list in record time.

Accused of treason and on the run with her best friend Lars, and unexpected ally Nicholas, a dead body is the last thing she needs. When a renowned tasseomancer is murdered, Adeline and her friends are the Magistrate's prime suspects. To clear her name, she'll need to unravel the tangled web of secrets connecting her past to Nicholas's future.

Fans of The Hollows Series, Charmed and The Craft are sure to devour this series from Rachel Rawlings.
Buy Better 'Ink Twice to start a magic and mayhem filled adventure today!

MY REVIEW
Adeline is on the run from the Magistrate with her best friend and the new ally that she really doesn't trust yet but knows there is something between them . Lars is her best friend and Nicholas is the one she really can't trust yet but Adeline knows that they were meant to be together . When a dead body turns up Adeline is pushed to the top of the wanted list. Can she figure out why Nicholas and her life is entwined and she needs to figure out and unravel the curse.
Now I must say that Adeline , Lars and even Nicholas are growing on me . Adeline you just want her to win so badly . She is one feisty girl who is more then meets the eye . She is tough but also so sweet sometimes you want to wrap her up and hug her . Other times you want her as your best friend and fighting on your side. Lars well he is like your big brother , he knows you and wants what is best for you but sometime he goes about it the wrong way . He is also a big pain in the behind when he thinks he is right but proven wrong . Non Nicholas he is the wild card , there is more to him but do we really want to know what he can become . You don't know if you should trust him or not They are becoming more complex in the second book .

This is a relatively fast read and i read it in an evening . The story starts right where the first book ended and picks up rather fast . The characters are well written and I  really like where the author is taking them . I was on the edge of my seat for most of the story . I love this authors writing but there were just a few problems in this book that would be worked out with a good editor . I also felt that there were a couple of areas in the book that just kind of dragged and could of been tightened up a bit . Over all i truly enjoyed this book and can't wait to see what happens to these characters . So if you want a snarky sassy heroine and two hot sexy warlocks this is the book for you , Check them out